The Resource Race was a game available during the Gielinor Games, released on 24 July 2012. One could access it by entering the portal in Varrock Square.

It was set on four islands, where the goal was to collect as many resources as possible in five minutes and load them into the starting island's resource deposit. 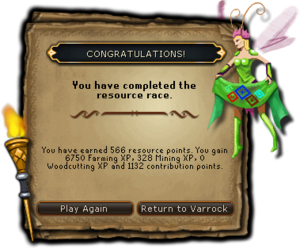 There were three islands in conjunction with the starting island at the centre. The western, northern, and eastern islands were the resource locations for Farming, Mining, and Woodcutting, respectively. The resources were colour-coded for skill level needed to gather them.

A reliable method for maximising Farming XP during the Resource Race activity is as follows:

This method will reliably gain you 60+ herbs per game. This will allow you to hit your daily XP cap quickly.