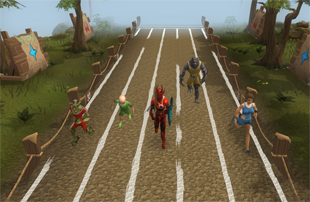 Calling all budding athletes! Representatives of the peoples of Gielinor have gathered to help bridge the gap between their species. They have proposed four grand sporting events, where each race can compete (fairly and within the rules of course) in order to prove their worth to their patron deities.

A portal has been constructed in Varrock square to transport athletes to a series of floating islands (courtesy of the clans) that have been custom-made to host the inaugural Gielinor Games.

What seems like an event of a serious nature is actually a chance for everyone to let their hair down and have a break with comical sporting events. So, try not to take things too seriously, as you'll be taking part in an event that will have you chasing cheese down a hill, among many other things.

There are four events to take part in:

You might want to turn on your audio too as there are commentators that will throw some cheesy puns your way while you're avoiding cows and gathering herbs.

JMods will be around to help out too, running marathon events and award ceremonies.

To reward you for your efforts, as well as the XP to be gained from taking part in the events, contribution points will be awarded. These points can be traded for various items such as three tiers of costume items, two emotes and a title. You can also purchase XP boosting rings that will grant you more XP when you're participating in the games.

The games will last for 4 weeks - more than enough time for you to experience all of the events and earn enough to buy all the rewards.

Feel like you have the "eye of the tiger shark"? Well… head on over to Varrock and speak to the delegates to pick your deity and take part.