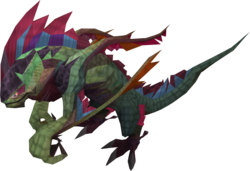 Jadinkos are reptile-like plant creatures native to Karamja. Papa Mambo came up with the name "jadinko." They are studied by the druids Astlayrix and Dotmatrix, among others. They live under the Herblore Habitat in their caves, which are magically enhanced by the roots of the Jade Vine. The jadinkos are ruled by a stationary queen, whose job is to lay new eggs, which hatch jadinko babies. These baby jadinkos grow either into jadinko males, whose duty is to please the queen, jadinko guards, who cannot fulfil their job as males and thus are placed on guard to protect the queen, babies, or any of the normal jadinkos, which collect fruit and food above the ground and can be caught in the Herblore Habitat. The Queen also lays corrupted eggs, which result in mutated babies. These can be killed by those with a high Slayer level and are capable of not only beating their opponents in melee combat but can also use the magic of the vines to snare the opponent and deal some magical damage.

To trap jadinkos, players need a Marasamaw plant as well as the habitat requirement (environmental feature, fruit tree, bush, and blossom). A withered vine can be placed in the marasamaw trap as bait.

The preferences of the god jadinkos change every week and are different for each player. Some god jadinkos also may prefer one of the patches to be completely empty.

God jadinkos may not always be set to the same coloured vines; the colour needed per god jadinko may vary from week to week; the Guthix jadinko may require a red vine growing. Bear this in mind when attempting to achieve the necessary assortment.

If a player catches every non-godly jadinko they can collect an experience reward from Papa Mambo.

Unlike in the Herblore Habitat, on Anachronia, all jadinkos are caught using Marasamaw plants. They require a Hunter level 10 higher than their Herblore Habitat variants but do not require the player to build their habitat, other than the need to use juju hunter potions for Cannibal, Aquatic, Camouflaged, or Draconic jadinkos. Note that juju hunter potions used on Anachronia are not location specific. For example, a potion can be used on the red vine blossom near the Bagrada rex, and Aquatic jadinkos can be caught at the beach.

All ten types of jadinkos will count for the Jadinko hunting weekly Distraction and Diversion when caught on Anachronia, but the three tracking jadinkos (Shadow, Diseased, and Camouflaged) will only be counted there if caught with Protean traps.

Mutated jadinkos can be slain and are assigned by Sumona, Duradel/Lapalok, Kuradal, and Morvran. The adult ones frequently drop noted herbs and their special drop is the Whip vine, which can be added to an abyssal whip to increase its bonuses (also giving it a new special attack).

Several types of Jadinko could be found in the Easter Bunny's burrow during the 2015 Easter event.

This information has been compiled as part of the update history project. Some updates may not be included - see here for how to help out!
Retrieved from ‘https://runescape.wiki/w/Jadinkos?oldid=35685814’
Categories:
Hidden categories: