From the RuneScape Wiki, the wiki for all things RuneScape
Jump to navigation Jump to search
The Old School RuneScape Wiki also has an article on: osrsw:Grubfoot
GrubfootPrisoner? (edit)? (edit) 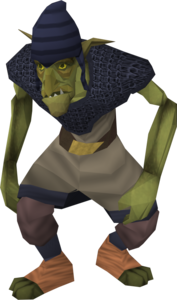 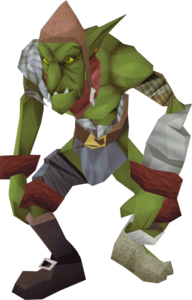 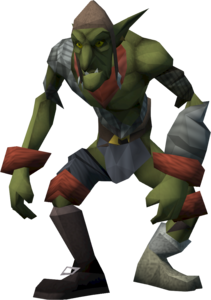 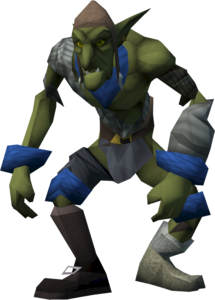 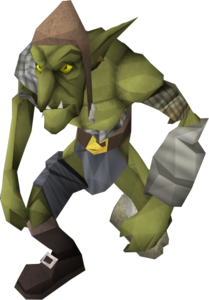 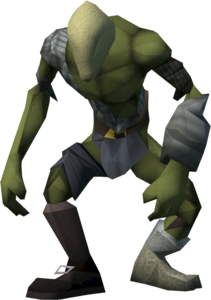 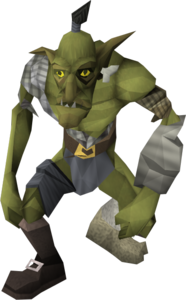 Grubfoot is a small, peace-loving goblin inventor who currently lives in the cave goblin city of Dorgesh-Kaan, where he uses his magic to assist the inventor Oldak with his experiments. He also resides in the Invention Guild in Asgarnia, where he experiments with the use of divine energy as a power source, and represents the Cave goblin technology tree on behalf of Oldak.

Unlike most Bandosians, Grubfoot is unaware of Bandos's true philosophy, and believes that he wanted the goblins of Gielinor to live in peace together. Despite his delusional views, Bandos took advantage of his spiritual sensitivity, which allowed him to see through Guthix's edicts barrier and hear those who use the Pool of Visions in Bandos's throne room, a feat which only Hopespear and Caldi are otherwise known to have been capable of. Using the bowl, Bandos sent Grubfoot dreams to manipulate him into leading Zanik to Yu'biusk as part of his plans to break the Edicts of Guthix and return to Gielinor.

He plays roles in a number of quests, namely Goblin Diplomacy, Another Slice of H.A.M., Land of the Goblins, The Chosen Commander and The Mighty Fall. 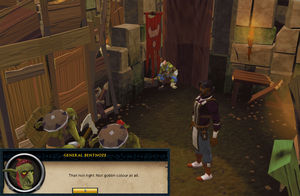 Grubfoot trying on some blue armour.

In year 169 of the Fifth Age, General Wartface and General Bentnoze decided to celebrate the goblin new century by changing the colour of the goblin armour that the residents of Goblin Village wear, but were unable to agree on a colour, with Wartface wanting green and Bentnoze wanting red.

The duo enlisted an adventurer to help decide on colour, and requested they bring dyed versions of the armour to them to try out. The generals used Grubfoot to model the armour, much to his disdain, but after seeing orange and blue armour, they eventually settled on the brown armour that they started with in the first place.

Some time later that year, Grubfoot had a dream of a new goblin visiting his village, holding up a holy mace, causing goblins from all over the world to gather around her. Grubfoot believed her to be the Chosen Commander of goblin legend, destined to lead the goblins to victory over the world. 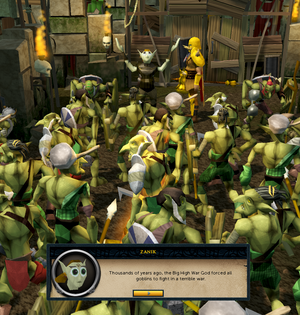 The village gathers around Zanik.

A day later, the Dorgeshuun goblin Zanik and the adventurer that helped the generals out previously visited the village, hoping to find some answers on the ancient mace that they had found. While the generals quickly dismissed Zanik due to her disbelief in "Big High War God", Grubfoot recognised her as the goblin from his dream. Although Bentnoze believed Zanik was not the Chosen Commander, Wartface allowed Grubfoot to continue speaking, believing that disobeying the Big High War God's orders would be disastrous.

Zanik's gathering was cut short when Sigmund and other agents from the H.A.M. organisation attacked the village and kidnapped Zanik, wishing to use her to incite a war between the cave goblins and the dwarves, with the intent to wipe out both races. The generals then instructed Grubfoot to gather their respective sergeants, and for the adventurer to meet them in Lumbridge Swamp, where Grubfoot had seen Sigmund carry off Zanik.

With the help of the sergeants, the Adventurer was able to defeat Sigmund and rescue Zanik.

The following takes place during Land of the Goblins.

Some time later, Grubfoot had another dream featuring Zanik. This time, he dreamt that Zanik would lead the goblins of Gielinor to Yu'biusk, where they would live peacefully. The next day, he travelled to Dorgesh-Kaan in an attempt to speak with Zanik, but was denied entry by Mistag, as the treaty with Lumbridge only allowed humans in, not surface goblins. The adventurer, who was passing by, was able to convince Mistag to let Grubfoot in after stating that they would claim responsibility for him.

Grubfoot was amazed by the city's innovation, and how the Dorgeshuun had bigger eyes than him. The Dorgeshuun guards carefully watched Grubfoot to ensure he would not cause trouble, while the civilians treated him with respect. Both the guards and citizens also told him where he could find Zanik. 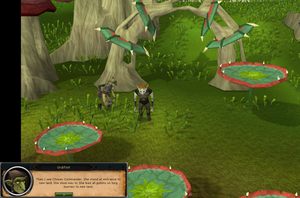 There, he explained his dream to her, and shared his view that maybe Zanik's destiny as the Chosen Commander of legend was to lead the goblins to Yu'biusk, where they could live in peace. Curious about Yu'biusk, Zanik and the adventurer asked more about it, and Grubfoot told them of the Goblin Temple at the Plain of Mud, and that the priests there may know more about how to reach Yu'biusk. After making them promise that they wouldn't tell any other humans about it, he told them that it could be found beneath Hemenster, and proceeded to return to Goblin Village.

Using Grubfoot's advice, Zanik and the adventurer were eventually able to reach Yu'biusk, only to discover that it was a dead planet, and for Zanik to be pulled into a mysterious box.

Kidnapping by H.A.M. and the defeat of Bandos[edit | edit source] 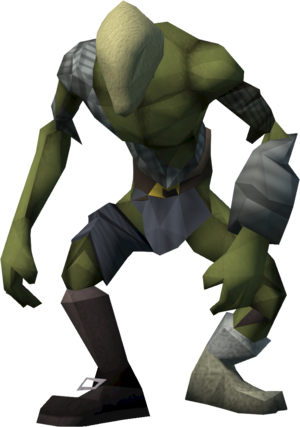 Grubfoot while imprisoned in the H.A.M. base.

Some time later, Grubfoot was fed up by how the generals treated him. Having had a pleasant experience in Dorgesh-Kaan, he decided to live there; on the way, he was ambushed by some H.A.M. members after he arrived in Lumbridge. When he shouted for help, the unhelpful and goblin-wary Lumbridge guardsmen simply laughed at him, and called him a stupid goblin.

Grubfoot was then imprisoned in the jail of the H.A.M. splinter base, underneath the windmill owned by Milton the Miller. There, he was interrogated by Sigmund and his group of like-minded H.A.M. members, and badly beaten whenever he gave answers that displeased them, like denying that the goblins were planning attacks on human cities. Eventually, he just agreed with everything they said to make them beat him less.

The adventurer eventually discovered him there while investigating a H.A.M. plot against Dorgesh-Kaan, and helped him make his escape. During their escape, they were spotted by a cell guard, but ultimately Grubfoot froze him using magic. The adventurer was surprised to see that Grubfoot, and goblins overall, could use magic. Grubfoot then explained that certain goblins are gifted with magic, supposedly power from Bandos himself, but since only priests are allowed to use it, he hid it for fear of retribution from Bandos.

On the way out, Grubfoot and the adventurer found themselves in the middle of an ambush by a group of goblins from the temple, led by a Bandos-possessed Zanik. Grubfoot quickly left for Dorgesh-Kaan once Sigmund attacked the adventurer, leaving the adventurer to kill him and free Zanik from Bandos's control.

After Grubfoot arrived in Dorgesh-Kaan and met up with Oldak, who wished to learn more about his magic. Grubfoot complied, thinking that perhaps Bandos wanted him to teach the Dorgeshuun magic, and that's why he let him do it. An argument soon erupted between the two however, with Oldak believing Grubfoot's magic to be a natural effect independent of Bandos, similar to human magic, and Grubfoot believing it to be a gift from Bandos. Their argument was interrupted by Zanik and the adventurer, who wished for their help in stopping the Bandos avatar's attack on the city. Grubfoot agreed to help, dismissing the god attacking their city as an impersonator, reasoning that the real Big High War God would never attack goblins.

Oldak then theorised that perhaps Grubfoot was half-right, and that while Grubfoot's magic is a natural effect, Bandos used similar magic to regenerate, and proposed combining Grubfoot's magic with cave goblin technology to create a weapon capable of defeating Bandos's avatar. Putting this theory into practice, Grubfoot and Oldak upgraded Zanik's crossbow with Grubfoot's magic, and gave it to the adventurer and Zanik to use in their duel against the avatar to stop it from regenerating. 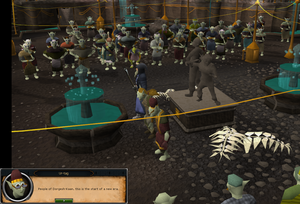 Grubfoot and the cave goblins celebrate the defeat of the Bandos Avatar.

Using the crossbow, the adventurer and Zanik were able to defeat Bandos's avatar, saving Dorgesh-Kaan. After saving the city, Grubfoot decided to stay in Dorgesh-Kaan and continue to help Oldak with his inventions, happy that he doesn't boss him around or care about what colour clothes he wears. He believed that Zanik fulfilled the prophecy of the Chosen Commander by defeating the "false Big High War God", allowing goblins to worship the real one in peace.

Shortly after Bandos's death at the hands of Armadyl towards the beginning of the Sixth Age, a number of Bandosians attempted to attack Dorgesh-Kaan, blaming Zanik for Bandos's death. Coming up with a plan to delay them and perhaps allow Zanik to become leader of the remaining Bandosians, the adventurer was able to convince them to hold a Kyzaj Tournament on Yu'biusk to decide the new leader of the Bandosian faction, with many doubting General Graardor's leadership capabilities. 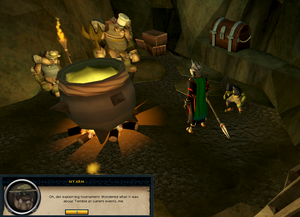 The adventurer fought on behalf of Zanik in the event, representing the Dorgeshuun, and Grubfoot watched on Oldak's behalf, cheering on the adventurer alongside My Arm and Burntmeat. He gave tips on the adventurer's opponents, and was able to detect a human infiltrator that was trying to sabotage the tournament.

The adventurer was eventually able to triumph over General Graardor and win the tournament on behalf of the Dorgeshuun, and had the choice of sparing or killing Zanik. If spared, Zanik led many of the remaining Bandosians in search of somewhere habitable on Yu'biusk to live. If killed, General Graardor took them back to the God Wars Dungeon in search of the godsword.

Either way, Grubfoot decided to return to Dorgesh-Kaan, and continued to help Oldak with his experiments. If Zanik was spared, Grubfoot expresses the opinion that she and the other Bandosians will probably not survive. If Zanik was killed, Grubfoot will berate the adventurer for being fooled by Zarador's "fancy words", stating that the Big High War God would not approve of killing his friend.

This information has been compiled as part of the update history project. Some updates may not be included - see here for how to help out!
Retrieved from ‘https://runescape.wiki/w/Grubfoot?oldid=35890017’
Categories:
Hidden categories: