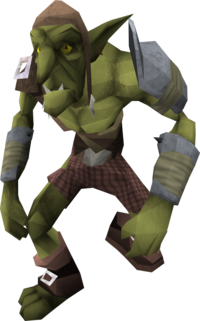 Wormbrain is a goblin found in the Port Sarim Jail. He was arrested for his part in a goblin raid on residents living on the east side of the River Lum. He and his band forced Lachtopher to flee to the western side of Lumbridge and killed Lozar, a mage protecting a piece of the map leading to Crandor. He looted a box and lingered trying to open it while the other goblins fled, leading to him being captured by the guards and thrown in prison.

During Dragon Slayer, the map piece he has must be obtained, either by giving him 10,000 coins to bribe the guards with or by fighting him. If he is fought, he drops the map piece once his health is depleted and it must then be taken by using Telekinetic Grab.