From the RuneScape Wiki, the wiki for all things RuneScape
Jump to navigation Jump to search
The Old School RuneScape Wiki also has an article on: osrsw:Burntmeat
This article is about the non-player character. For the item, see Burnt meat.

Most trolls are named after the first thing they eat[1], but Burntmeat says that burnt meat was the first thing he tried to cook. Burntmeat enjoys cooking as well as eating humans and goutweed. He is also illiterate.[2] 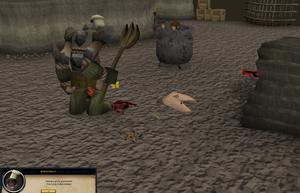 Burntmeat is the largest troll cook inside the stronghold. Bigger trolls are generally higher in the troll hierarchy, so this may be another reason why he is the chief troll cook. Burntmeat is always found inside the troll kitchen, where he eagerly cooks for the rest of the trolls.

Being the head chef of the mountain trolls for a long time, Burntmeat has spent his life cooking "delicious" food for the trolls. As the mountain trolls eat humans, Burntmeat originally wanted to store them for long-term purposes by stuffing them in crates, but this backfired as the humans died faster and thus, Burntmeat suggested the idea of a prison to keep the meat fresh.[3]

Burntmeat encountered a human adventurer in the year 169 of the Fifth Age, who planned to cook them since he was tired of cooking goats. The adventurer easily persuaded him by claiming that they are too "hard"; after a quick inspection, Burntmeat agreed[4], and asked what they wanted. The adventurer requested some goutweed, which Burntmeat promised if they would fetch him a human to cook.[5] The adventurer was able to fetch a "human" with Eadgar's help, who soaked it in a potion to ensure Burntmeat would tell the truth when he ate the "human". Upon being given the "human", Burntmeat rewarded the adventurer with some burnt meat, and told them where they could find goutweed due to the potion's effect.[6]

The following takes place during My Arm's Big Adventure.

Burntmeat found the adventurer exploring the kitchen again; due to their assistance in securing a "human" to cook, he had another request for them. He told them that he previously thought the trolls had picked all the goutweed, but soon heard rumours that there was a place where goutweed was growing again.

Burntmeat concluded that if the humans were growing goutweed, the trolls could too[10], and asked the adventurer to help his assistant, My Arm, grow some. The adventurer agreed to help Burntmeat, but on the condition that he would never cook humans again, which the troll chef promised, claiming that goat tasted like human if enough goutweed was used[11]. If asked about the equipment he confiscated from the adventurer, Burntmeat stated that he discarded them, as the "red metal clothes" (dragon armour) hurt his teeth, and the "big whip thing" (abyssal whip) got stuck in his throat.[12]

The adventurer helped My Arm grow goutweed. Burntmeat then offered the adventurer a lot of burnt meat as their reward (much to their disgust).[13] As a result of being able to grow goutweed, the trolls' demand for the herb skyrocketed, and both My Arm and Burntmeat worked hard to keep their appetites satisfied. Burntmeat also utilized a loophole in the promise he made with the adventurer, stating that he could just serve humans up raw (as the adventurer only stated that he didn't have to cook them, not eat them) and hoped that more humans would come with goutweed so they could eat them with seasonings.

He later appears on Yu'biusk along with My Arm to the Kyzaj Tournament in support of the adventurer, and informs My Arm that Bandos had died fighting Armadyl.[14] He offers them a new recipe that Kris taught him, which is 'dragon eye meatballs and goutweed rock cakes'.[15] The adventurer has the option to taste it, and it is described as tasting and feeling like acid. This does not harm them, however.