From the RuneScape Wiki, the wiki for all things RuneScape
Jump to: navigation, search
This article is about the weapon. For other uses, see Kyzaj (disambiguation).
"Bandos weapon" redirects here. For the godsword, see Bandos godsword.
Kyzaj? (edit)

The kyzaj is a weapon obtained during The Mighty Fall. It is originally obtained as an item that is not wieldable outside of the quest fight with Graardor and cannot be banked.

After the quest, it becomes either an Honourable kyzaj or a Bloodied kyzaj, which can be wielded and used anywhere.

A Bandos hilt can be attached to either of the kyzaj to create a superior honourable kyzaj or a superior bloodied kyzaj. This will improve its stats to those of a Tier 75 weapon.

Zanik teaches you how to wield the Kyzaj. 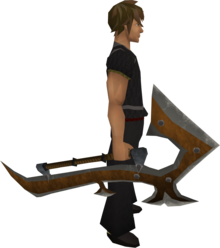 The update history project is a work-in-progress – not all updates to this topic may be covered below. See here for how to help out!
Retrieved from ‘https://runescape.wiki/w/Kyzaj?oldid=33932732’
Categories:
Hidden categories: