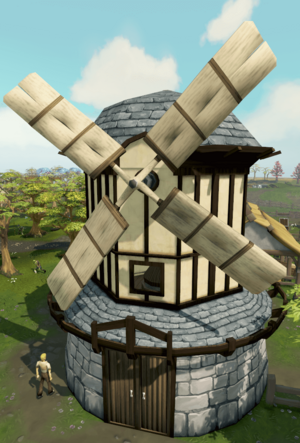 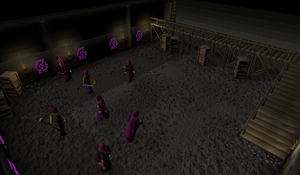 The base of Sigmund. 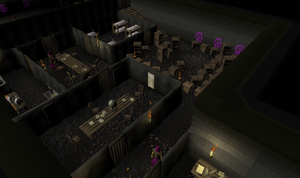 The storage room and prison.

Mill Road Mill is a windmill north of East Ardougne. It is run by Milton the Miller, a member of the radical Humans Against Monsters group. Richard can be found in the mill selling basic farming supplies in his shop. There is a statue of a king to the west.

Since the opening of the Dorgesh-Kaan - Keldagrim Train System, Sigmund took up residence in a secret basement under the mill, with glyphs on the wall preventing teleportation. When Grubfoot visited the Plain of Mud, he was abducted by the H.A.M. agents and taken to the base. At roughly the same time, H.A.M. agent Walton was sent to Dorgesh-Kaan, disguised as a merchant and started poisoning the children of the city, until he was arrested and even killed by Zanik, who had been influenced by Bandos himself.

Later, an adventurer infiltrates the base to free Grubfoot, but, just as they leave, a fully possessed Zanik, the Goblin High Priest and a small group of goblins break into the base and the Assault on Sigmund's Base begins, wherein all goblins and H.A.M. agents are killed, including Sigmund, and the High Priest becomes the Bandos Avatar after Zanik defied him. The basement is destroyed in an ensuing earthquake and can no longer be accessed afterwards.