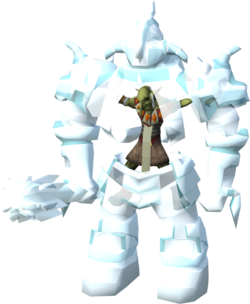 The Bandos avatar is the final boss of The Chosen Commander quest. It is the Goblin High Priest Bighead with the amulet of Bandos while being under his control. When the high priest took Bandos' pendant and equipped it, he became Bandos' avatar, since most of his power was in the pendant.

In order to win against the avatar, you will have to shoot him with Zanik's crossbow. However, during the fight, the crossbow gets broken into three pieces, and needs to be reassembled again to work properly. After you defeat him the second time using the special crossbow is a dialogue option. However, if you do not follow the proper dialogue, he will use his powers to restore all of his health, making him technically immortal.

The Bandos avatar is responsible for depositing Bandos's Ultimatum in the middle of Dorgesh-Kaan.

The Bandos avatar can be easily maged or ranged. The avatar stays in the same position throughout the fight so use this to your advantage. Protect from Melee may help when Zanik's crossbow breaks, as you then get attacked by warriors whilst picking up the crossbow pieces.

When defeated, the Bandos avatar drops bones and the pendant. The destruction of the pendant caused a huge blow in Bandos' power, weakening him immensely.