From the RuneScape Wiki, the wiki for all things RuneScape
Jump to: navigation, search
The Old School RuneScape Wiki also has an article on: osrsw:Goblin Cook
This article is about Mudknuckles the cook. For the goblin found east of Lumbridge, see Goblin cook (Lumbridge).
Goblin CookMudknuckles? (edit) 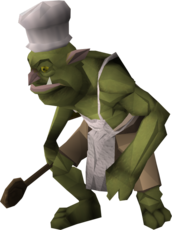 The Goblin Cook, whose real name is Mudknuckles is a goblin chef who plays a role in the Recipe for Disaster subquest, Freeing the Goblin Generals. He helps the player create the Slop of compromise, a bowl of mush composed of a Dyed orange, a piece of Soggy bread, and some Spicy maggots. The slop is then used to break the spell set on Generals Bentnoze and Wartface by the Culinaromancer.

He is noteable for inventing a process of cooking, dubbed "fast food", which is completely burned food delivered quickly through an explosion, causing the cauldron to be launched in the air, arriving speedily to it's destination (and likely destroying it in the process). Due to such experiments, he is often covered in a residue of some kind. 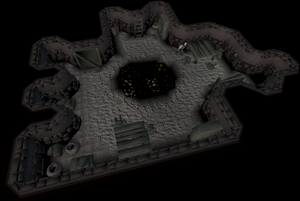 Mudknuckles in his burned kitchen.

This information has been compiled as part of the update history project. Some updates may not be included - see here for how to help out!
Retrieved from ‘https://runescape.wiki/w/Goblin_Cook?oldid=35592878’
Categories:
Hidden categories: