From the RuneScape Wiki, the wiki for all things RuneScape
Jump to navigation Jump to search
The Old School RuneScape Wiki also has an article on: osrsw:Dorgesh-Kaan

The Republic of Dorgesh-Kaan is the capital city of the Dorgeshuun cave goblin tribe. The city can only be accessed after completion of Death to the Dorgeshuun. Other quests later in the Dorgeshuun quest series allow use of certain features of the city (like the train to Keldagrim).

The city itself is very large, rivaling other capitals such as Keldagrim and Varrock. The city is two stories tall, with the bottom level containing many side chambers where goblins live and work. Built on the second floor are many free-standing houses and public buildings, including the Council Chambers and local school. The city's design is very intricate, and its maze-like layout and strange architecture often confuse those visiting the city for the first time. Dorgesh-Kaan is lit by a complex system of magical light orbs, powered by a geothermal power plant located in the dungeon south of the city. 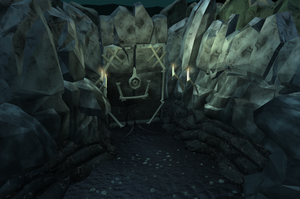 The humble gate to the city

There are multiple ways of accessing Dorgesh-Kaan. 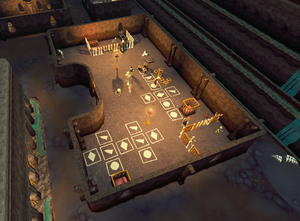 Several thousand years ago, during the height of the bloody God Wars, the Dorgeshuun were a war-like tribe of goblins. Like the rest of the goblin race, the Dorgeshuun served the god Bandos, an entity that revelled in war and bloodshed. For many years the Dorgeshuun fought the other races of the world in his name. However, in the 32nd century of the war[1], Bandos ordered the tribe to fight in a battle that they could not win and that would result in the death of them all.

To escape this fate, the Dorgeshuun refused to fight for Bandos; soon after they fled to a life beneath the surface of the world to hide from the god they once served, for if they didn't, Bandos would destroy them all in anger of their treason. The Dorgeshuun soon adapted to this way of life. Rather than suffering for their treason, the Dorgeshuun embraced their new home and built the mighty city of Dorgesh-Kaan, but not before a massive government reform and violent civil war.

The Tribal and Republic factions fought for some time, attempting to gain control of the city. Only when the Tribal army and leader, General Bonehelm, was killed in a cave-in did the city truly begin to grow. Hidden from the wars of the surface, it quickly became what was, at the time, one of very few permanent settlements in Gielinor. Built upon peace and brotherhood, it differed greatly from the catastrophic surface world.

Only recently did the Dorgeshuun reveal their city to humans. Having existed for so long with no outside threats, the city has become prosperous enough to attract many human visitors. Merchants travel to the marketplace in hopes of making their fortune selling exotic surface foods to the cave goblins. Diplomats, such as Duke Horacio of Lumbridge and the Consortium of Keldagrim seek to establish diplomatic ties with the goblins. Adventurers come to the city to slay the beasts that exist in the city's unexplored caverns and caves. Others travel merely to sample the cave goblin's unique food or to study the goblin's advances in magic.

The marketplace is a good place to start. A general store, lamp stall, and various merchants can be found here. Most of the other merchants will sell strange foods made from local resources. The food merchants will buy any surface foods for higher prices than normal, as it is new to them. The Dorgesh-Kaan market trading minigame may be played here to make money. 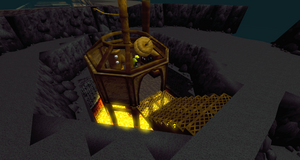 The generator room in the Agility course

A high-level Dorgesh-Kaan Agility Course can be found south of the city; it requires 80 Agility. An alternative route using a Mithril grapple requires 80 Strength and 80 Ranged and provides ranged experience.

Below the agility course is a large dungeon, the Dorgesh-Kaan South Dungeon. It has a unique Slayer monster called a Molanisk, as well as other beasts such as cave slime, giant frogs, and both large and small varieties of cave bugs.

There is a fairy ring (AJQ) in the dungeon. To exit from the dungeon to the city go east of the ring, then go north, west and again to north until a ladder. Climb up the ladder and you'll be at the Dorgesh-Kaan course. For the south part of the city climb down the stairs at north.

A train system between Dorgesh-Kaan and Keldagrim can be used after completing Another Slice of H.A.M.. It takes time after entering the train to leave. After leaving there will be a short cut scene and you'll end up in Keldagrim or Dorgesh-Kaan depending which one you left from.

Dorgesh-Kaan has many features that players training Thieving will find appealing. There are 25 chests (8 gems, 17 regular) throughout the city containing a wide variety of loot such as gems, lamps, ore, frog-leather armour, and Summoning charms (mostly green). Most cave goblins can also be pickpocketed, and the wire machine in the south side of the city can be stolen from. 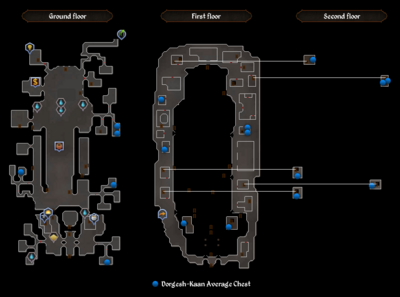 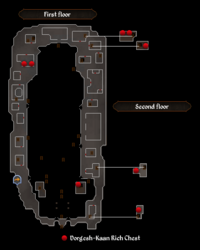 Directly outside of Dorgesh-Kaan's gates is the Dorgesh-Kaan mine containing iron and silver, which may be sold to Mistag for 13 and 60 coins each, respectively. The fact that Mistag is very close to the iron rocks makes this a good place for iron powerminers. 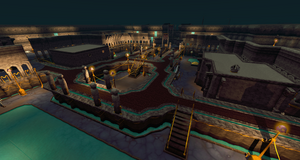 The industrial area of the city

Moving-over-distance spheres can be obtained from Oldak by bringing him molten glass and two law runes. Players with 40 Invention can also speak with him to start with the cave goblin technology tree.

After completion of The Chosen Commander, a statue of the player and Zanik is erected at the centre of the city. The player can choose from several different designs to change its appearance.

There is a certain type of fish specific to Dorgesh-Kaan that cannot be caught by players. They can only be found in the shallow pools north and south of the city's marketplace. 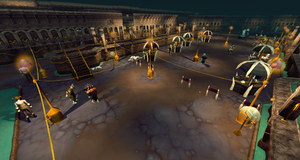 Dorgesh-Kaan General Supplies is run by Lurgon, who wanders around the marketplace.