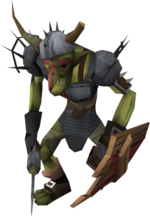 Hollowtoof is a goblin from Goblin Village and is the leader of the goblin raids. Players may talk to him before all the goblins are killed, and if a player has a sufficiently high combat level, he will give the player a raider axe, raider chainbody and a raider shield. Once all the other goblins are killed, he can be killed for the items too. He drops some of the best equipment available for free players, the gud raider axe, gud raider chainbody and the gud raider shield. It appears that all players who attack at least one goblin and Hollowtoof have a chance for a gud raider item. Hollowtoof is stronger than his level would suggest; despite being only level 77, he can put up a good fight for even high-level players.

The update history project is a work-in-progress – not all updates to this topic may be covered below. See here for how to help out!
Retrieved from ‘https://runescape.wiki/w/Hollowtoof?oldid=34649408’
Categories:
Hidden categories: