From the RuneScape Wiki, the wiki for all things RuneScape
Jump to: navigation, search
For other uses, see Skeleton (disambiguation).
This article is about the skoblins under Lumbridge. For the ones in the Goblin Temple, see Skoblin (Strongbones). 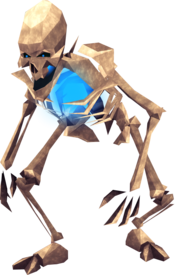 Skoblins can be found in the ninth room of the Lumbridge Catacombs which can only be entered after completing The Blood Pact quest. They were created by Dragith Nurn, a now undead necromancer, during his experiments with local creatures.

This is one of the monsters that drop Mask part 4, which can be used with the 4 other parts to create the Mask of Dragith Nurn.

As these are skeletal goblins they count as both skeleton and goblin slayer tasks.