From the RuneScape Wiki, the wiki for all things RuneScape
Jump to navigation Jump to search
The Old School RuneScape Wiki also has an article on: osrsw:Yu'biusk 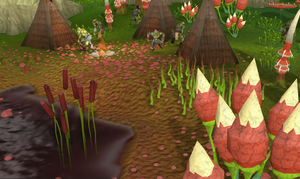 Yu'biusk as it appeared before Bandos arrived 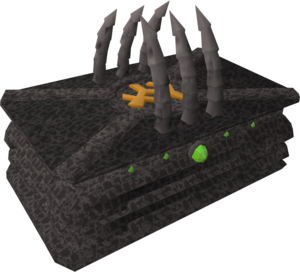 The strange box on Yu'biusk

Yu'biusk is a world within the multiverse that is separate from Gielinor. It was originally the home of a number of species, including the goblins, ogres, orks, hobgoblins, fayrgs, raurgs and ourgs . According to Grubfoot's dream, it was originally a cool and wet place, covered in marshes, swamps, and other wetlands. Its original inhabitants lived primitive lives and although they had small skirmishes and conflicts, organized warfare had not yet been invented. At some point Yu'biusk was discovered by the god Bandos, who after seeing the people of the world as savages, decided to give them civilisation as he knew it and declares the world as his. During the God Wars, Bandos brought the various Yu'biuskian races to Gielinor to fight for and bring glory to his name. Following Bandos' banishment from Gielinor he took his anger out on the Yu'biuskian tribes. Some of these tribes he'd manipulate and decieve while others just took advantage of weakened tribes and attacked them. Eventually this led to the construction of fire-raining weapons - weapons the likes no other world has seen according to Bandos. These weapons were what eventually tore Yu'biusk asunder and made it what it is today. 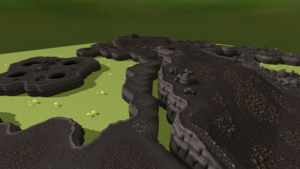 Yu'biusk as it appears today, ravaged by war 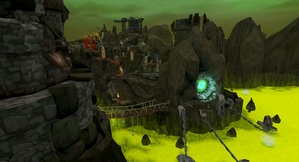 During the Land of the Goblins quest, the player travels with Zanik and Oldak through a Fairy ring to this now-barren place in hopes of bringing the goblins to peace. After opening a strange box Zanik disappears, and the others are forced to go back through the portal as it closes. Zanik remained trapped on Yu'biusk until The Chosen Commander, in which she returns to Dorgesh-Kaan while the player fights Merchant Walton. The box has the symbol of Bandos printed on it.

Players can return to Yu'biusk after the quest is completed by using the fairy ring code BLQ. However, there is no sign of Zanik other than the strange box that she disappeared into. Examining the box reveals that it looks like it never had a way of opening up. Interestingly enough, the fairy ring in Yu 'biusk is a portal, instead of the usual fungi.

However, with the release of the quest The Chosen Commander, the strange box in this dead plane of existence now has a use. After finishing the quest, the box may be used to teleport to the exact spot in Bandos' throne room where Zanik is seen unconscious up to the point in the quest when players can control her. It is accessed by entering the portal north of Falador and east of Goblin Village.

After completing The Mighty Fall quest, Yu'biusk is only reachable through the portal placed at the wrecked Bandosian tower from world event two located north of Falador.

According to the goblin Strongbones, "Yu'biusk is not a place on RuneScape. It is another plane of existence. No goblin alive today has ever been there. It is many millennia since the Big High War God brought our ancestors from Yu'biusk, but the call to that plane is still strong in us. If barriers between the planes were ever to be broken, goblin blood would call out to open a portal to Yu'biusk."[1] During the quest Land of the Goblins, the player, Oldak and Zanik go to Yu'biusk. During the events of The Chosen Commander, Zanik explains that a box leading to Bandos' Throne is in Yu'Biusk, and time moves at a matter of seconds to our days. She escapes and teleports herself to Dorgesh-Kaan at a convenient moment.

According to Zanik after the Chosen Commander quest, Oo'glog is somewhat similar in climate and geography to Yu'biusk as it originally was. Oldak has expressed his belief that nothing can be done to mend Yu'biusk. He speculated that, in thousands of years, it may become habitable again, but nothing can be done to speed the process up until then.

Additionally, Yu'biusk is involved with the Hopespear's Will miniquest. After defeating all 5 of the goblin priests (Snothead, Snailfeet, Mosschin, Redeyes and Strongbones) without armour, and have obtained all of their bones, their bones are then buried anywhere within Yu'biusk for bonus prayer experience. The bones cannot be buried on any level of the arena in Yu'biusk from The Mighty Fall. If attempted the message 'You should go to Yu'biusk before burying the bones' will appear in the chatbox.

Teleport to the Falador lodestone and run north until the entrance to Goblin Village is reached, east of it is a big green portal which can be used to teleport to Yu'biusk.

After the death of Bandos during the events of Bird and the Beast, the Bandosian forces led by General Graardor were set to attack the Dorgeshuun cave goblins. After the adventurer convinced them instead that they should choose a new leader (mostly by inciting conflict between members of the raiding party), and they finally decided to hold a tournament to determine who the new leader of the Bandosians would be. This tournament took place on Yu'biusk, which was eventually won by the adventurer, filling in as the cave goblin champion, as what was officially called a 'trained attack beast' belonging to Zanik. Either killing or sparing Zanik, the adventurer left the other forces either to go their separate ways, or to follow Zanik (if left living) into the deeper parts of Yu'biusk. General Graardor; however, returned to his place in the God Wars Dungeon, believing the godsword was necessary to locate now that the Bandosians were lacking a god.

Rocks and craters block access to the rest of Yu'biusk; the portal, perhaps by pure chance, leads to an area that is isolated from the rest of the world. The rest, save for Bandos's Throne Room, is completely inaccessible.