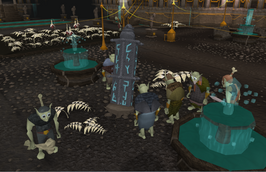 Bandos's Ultimatum was a religious war text transcribed by Bandos, a deity active during the cataclysmic God Wars. It is featured in The Chosen Commander quest.

Despite having been inactive for millennia, Bandos resurfaced in Year 169 of the Fifth Age, even being so bold as to create a corporeal avatar of himself on Gielinor. Hoping to reclaim the Dorgeshuun goblin tribe, Bandos's avatar entered Dorgesh-Kaan and planted the ultimatum in the city centre, inscribed upon a pillar of unknown make from within the parallel world of Yu'biusk.

The ultimatum, after the defeat of Bandos's avatar at the hands of the goblin Zanik and an adventurer, was destroyed. Over the crater it created the Dorgeshuun built a statue in honour of Zanik and her companion.

The following text is transcluded from Transcript:Bandos's Ultimatum.

To the goblins of the Dorgeshuun tribe. I, Bandos, the Big High War God, your god, give you this final warning.

For too long you have defied me. You disobeyed my battle orders and built a city where you did not worship me. You have broken every one of my commandments and felt no remorse. You have even dared to choose your own commanders, and when I sent my Chosen Commander, you did not recognise her, and banished her. Now, even she has fallen from my path.

Your rebellion has provoked my righteous anger. I should smash every Dorgeshuun goblin beneath my holy mace. I should make your caves collapse and wipe all memory of you from the face of the world.

But I am a merciful god. If you repent of your rebellion, I will forgive you. Then you may rejoin my army, and fight and die for my glory, as is your purpose.
Retrieved from ‘https://runescape.wiki/w/Bandos%27s_Ultimatum?oldid=22604659’
Categories: