From the RuneScape Wiki, the wiki for all things RuneScape
Jump to navigation Jump to search
The Old School RuneScape Wiki also has an article on: osrsw:Saragorgak 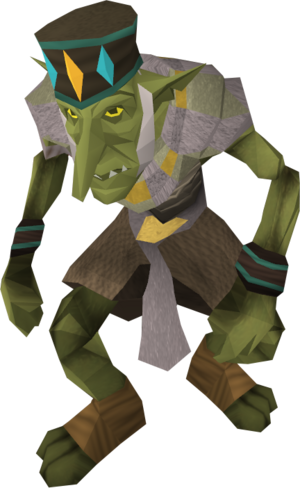 The Saragorgak is a goblin tribe found while doing the Land of the Goblins quest. They wear white goblin mail. Like the other tribes found in the temple, they were called upon by the god Bandos to fight in his name during the God Wars, although they were evidently the tribe Bandos sold to Saradomin during the War (how or why he used these goblins is unknown). It seems, however, that they returned to Bandos' cause in the end. Their name, in the ancient goblin tongue, translates to "Footsoldiers of Shiny Light".

The tribe's name incorporates Sara, the first two syllables of Saradomin, and gorgak. This would imply that the ancient goblins based their words on existing objects and forces and what they represented. Saradomin represented holiness (although more in a sense of piety than following any god religiously) and wrath was most likely associated with him in battle.