From the RuneScape Wiki, the wiki for all things RuneScape
Jump to navigation Jump to search
Bandos's remains? (edit) 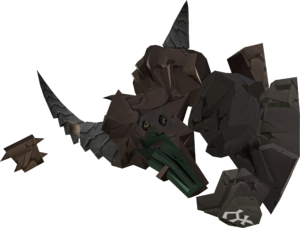 Bandos's remains are located just north of Falador, southeast of the Goblin Village. They are the remains of the god Bandos who was killed by Armadyl after 6 weeks of battle during the second world event The Bird and the Beast. They act as a prayer altar.

Bandos was killed when the Divine Focus (Armadyl's battle weapon) activated. It shot an enormous amount of divine energy over Falador to Bandos's Tower. When the ball of energy struck Bandos, he was knocked from his makeshift throne and beheaded by flying debris. His head landed just southeast of the Goblin Village. Armadyl then took Bandos's war mace and crushed the Big High War God's head. The remains of Bandos now lie beside the rubble of The Scarecrow, the Bandosian battle weapon.

A goblin named Goutbones has taken up residence beside the remains, reminding players of what happened to Bandos in the event, referring to him as the 'Dead High War God'. He will also replay the opening and final cutscenes for the player.

Bandos's remains are also found in the Behind the Scenes area during and after Gower Quest.

This information has been compiled as part of the update history project. Some updates may not be included - see here for how to help out!
Retrieved from ‘https://runescape.wiki/w/Bandos%27s_remains?oldid=35700544’
Categories:
Hidden categories: