From the RuneScape Wiki, the wiki for all things RuneScape
Jump to navigation Jump to search
The Old School RuneScape Wiki also has an article on: osrsw:Goblin Champion

The Goblin Champion is one of the 16 champions fought as part of the Champion's Challenge distraction and diversion. Like the other champions, he may be fought beneath the Champions' Guild, but only after a player finds a Goblin champion scroll which is dropped by all types of goblins. After being defeated for the first time, he may be fought again weekly for additional slayer and constitution experience.

Like the other champions, there is a special restriction during the fight with him; Players can only use Magic against him as Melee and Ranged are prohibited in the fight. He attacks using a weaker version of Earth Wave, which has a chance of draining prayer points slightly. 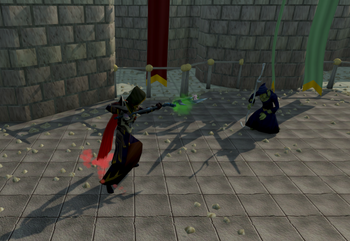 A player fighting the goblin champion. 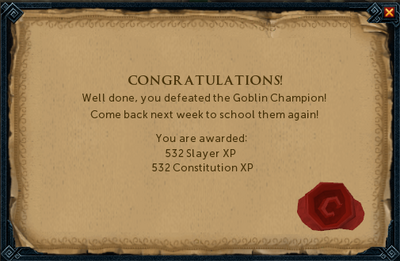 Transcripts Goblin Champion is the author or co-author of:

This information has been compiled as part of the update history project. Some updates may not be included - see here for how to help out!
Retrieved from ‘https://runescape.wiki/w/Goblin_Champion?oldid=35682366’
Categories:
Hidden categories: