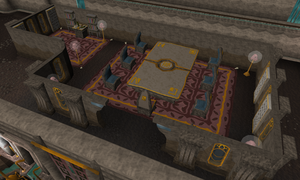 Where the council meets.

The Dorgeshuun Council is a group of seven elected Dorgeshuun that govern the Cave Goblin city of Dorgesh-Kaan. Unlike most of RuneScape's cities and settlements, Dorgesh-Kaan does not have a single elected leader. The council meets in the Council Chambers in the northern-most part of the city, where their meetings are documented by the city's Goblin Scribe.

The Dorgeshuun Council is led by an elected leader, but he does not seem to hold any more power over the rest of the council. The leader does, however, appear to go on many of the city's diplomatic missions, although such missions have been virtually non-existent until the city's accidental exposure to surface.

The Dorgeshuun Council works together to ensure that the city is kept peaceful and prosperous. However, because the council consists of seven members with equal power, decisions are slow to be made. For instance, the council took nearly a year before deciding to open the city to surface-dwellers, and even then it was decided only by a 4-3 vote.

Only very narrowly did the republican faction win. From that point on, the Dorgeshuun were ruled by the council, and for thousands of years they prospered under their rule.

When the Dorgeshuun were revealed to the surface-dwellers, the Council was terrified. They had heard of the dangers of the surface, and the attempted massacre by the H.A.M. cult made matters worse. Finally they decided to sign a peace treaty with Duke Horacio of Lumbridge, and from that point on they were at peace with most of the surface.

When the H.A.M. cult again attempted to kill them, this time with a dwarven machine from Keldagrim, the Council nearly had the mines closed to surface-dwellers again. It was only after being convinced by Zanik that they decided to consider opening the city.

The Dorgeshuun council consists of seven members. Upon becoming a member of the council, the first syllable in one's name is replaced by the title "Ur-".[1] The Dorgeshuun Council currently consists of: