The Cave goblin technology tree is a tree of technology from Invention. At level 40, you may choose to follow this path by talking to Oldak in Dorgesh-Kaan (requiring Death to the Dorgeshuun). You may also view the Technology Noticeboard in the Invention Guild with out completing any quests.

Cave goblin technology tree items can be unlocked using Goblin Currency, which is earned by completing Invention tasks (not to be confused with Daily Tasks). These tasks can be found at the noticeboard in the Invention Guild, near Oldak in Dorgesh-Kaan, and near Drorkar in Keldagrim. Up to 5 tasks can be saved and each 12 hours a new task is added.

The Cave goblin technology tree is as follows: 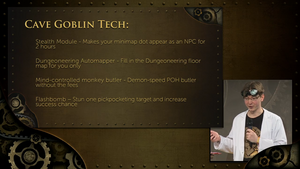 At RuneFest 2015 the following device concepts were shown as examples of items that could be included in the cave goblin tech tree: