From the RuneScape Wiki, the wiki for all things RuneScape
Jump to: navigation, search
The Old School RuneScape Wiki also has an article on: osrsw:H.A.M. Hideout
This article is about the H.A.M. base in southern Misthalin. For the H.A.M cave in Hemenster, see H.A.M base.

The H.A.M. Hideout is the base of operations for the H.A.M. organisation. The entrance is located in north-east Lumbridge (north-east of the Lumbridge furnace and west of the Lumbridge cow field) in an old mine. To open the Old mine entrance, players need to pick the lock on it with their Thieving skill, for a gain of 1xp for each attempt and 4xp for successful attempt. They can do this by hand, but a lockpick will increase the chance of success.

The main chamber is filled with both male and female H.A.M. members, and H.A.M. Guards. The H.A.M. Deacon is on a podium preaching to his congregation about monsters, and other side rooms contain other H.A.M. members. Players can find Johanhus Ulsbrecht to the south-west, and Jimmy the Chisel is locked in a cell.

The hideout is a good place for pickpocketing at low Thieving levels: 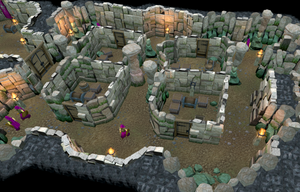 Having at least gone halfway through Death to the Dorgeshuun, there is another secret dungeon in the H.A.M. lair. When the player picks the lock to the secret entrance, just south of the podium in the main chamber, the player will gain access to the H.A.M. store rooms. The stores are patrolled by guards, though after you have finished the quest, they are not aggressive (i.e. they will not attack players unless attacked first or spoken to).

Pickpocketing the guards will yield the same finds as when you pickpocket a male H.A.M. member, but you will also receive keys (bronze, iron, silver and steel), which can be used to open the chests in rooms. Unlike when pickpocketing upstairs, you will not be thrown out of the hideout when pickpocketing in the stores, you will just receive a small amount of damage (varies depending on your current life points) when you fail. If you talk to the guards, they will act surprised to see you in their "secret" storeroom, and attack you. However, if you are fully equipped with full H.A.M. robes, they will have a few more dialogue options, and will not become hostile unless you say "Make me!" to their request for you to leave.

Each time you open a chest, a key of the corresponding type will be consumed. The chest can contain coins, gems (sapphire to diamond) and jewellery (rings, amulets, necklaces made of gold and sapphire to diamond). The gold jewellery is not worth it, so just drop that. All the rest of the jewellery can be sold for good money at the Grand Exchange or at Grum's Gold Exchange in Port Sarim; if you want to stay a while, bring a Staff of fire and some nature runes and High Level Alchemy the jewellery you get. You can also bring some Cosmic runes and some elemental runes to enchant the jewellery and sell it on the Grand Exchange.

You can also carry runes to teleport back to Lumbridge, where you can bank everything before returning to the hideout. You can do this repeatedly to make around 30-100k a load. This is a great way to raise your thieving and you make a nice amount of gold by saving these items to sell on the Grand Exchange.

All the following quests are involved with the H.A.M. Hideout: 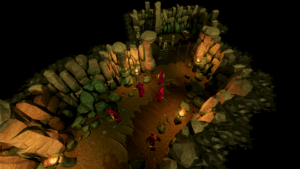 The jail where Jimmy can be found 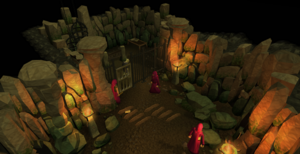