Goblin Village is the main settlement of goblins in Asgarnia, it is located north of Falador and north-east of Taverley. During the God Wars, the goblins fought in many battles, for many sides, but ultimately owed their allegiance to the 'Big High War God'. Now, without a war to fight in, the goblins have a tendency to fight among themselves, armour colour being a frequent cause of strife. From the time of the God Wars, much has been forgotten, though they still remember and celebrate the Battle of Plain of Mud where the 'Big High War God' (Bandos) gave them their commandments.

The Goblin Village is ruled by two generals, General Bentnoze and General Wartface, who were originally members of the Thorobshuun and Garagorshuun tribes respectively; hence their inability to co-operate with one another. 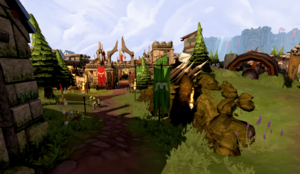 The entrance to the Goblin Village

In terms of resources, Goblin Village is a bit on the empty side. The resource it does have, though, are the masses of goblins that roam about the village. They are decent training for when you are just starting out on your journey as an adventurer.

There is a bucket spawn in the main building, as well as an everlasting fire in the centre of the village.

Reading a signpost south of the village entrance will show Goblin Village's current population. The number changes as goblins are killed and respawn.

There is also a beacon outside the village to the north-east.

An update on the 17th of October 2012 has created another point of interest. If players kill 15 Goblins while on a members server, one of the the three goblin bosses (Brokeface, Lumpnose and Stinkears) will appear and attack the player. These goblin bosses have a chance of dropping the Goblin cower shield on death. The kill number you are on will be retained even after logging out. Players who have completed The Chosen Commander can instead obtain the shield by talking to either of the Generals.

During the Bird and the Beast world event, Bandos' tower is found just outside of Goblin Village to the east. Afterwards only Bandos's remains remained. And north of that, east of the village is the Yu'biusk portal that opens up during The Mighty Fall quest.

Quests that involve the Goblin Village:

This information has been compiled as part of the update history project. Some updates may not be included - see here for how to help out!
Retrieved from ‘https://runescape.wiki/w/Goblin_Village?oldid=35702871’
Categories:
Hidden categories: