From the RuneScape Wiki, the wiki for all things RuneScape
< The Mighty Fall
Jump to navigation Jump to search

If you die during the tournament, your gravestone will appear outside the Yu'biusk portal.

Use the bank chest beside Zarador to bank any forbidden items. He will also explain the rules of the tournament. Talk to him once more to begin the tournament.

In this fight you cannot bring in your own weapons, and prayer is disabled. You may equip armour and jewellery, although non-combat items and runes are forbidden. The Kyzaj will automatically equip itself once the fight starts, and you will not be able to equip it beforehand. 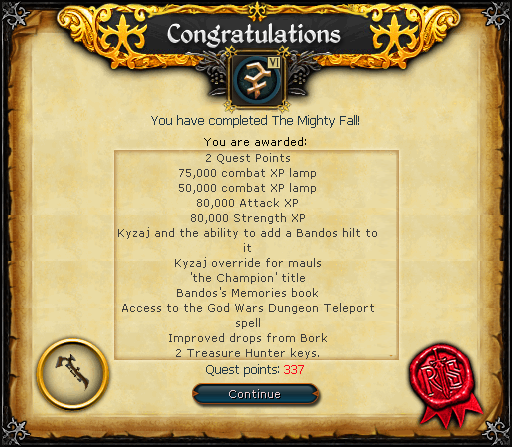 The Mighty Fall is directly required for the following quests/miniquests:

It is therefore an indirect requirement for the following quests and miniquests:
Retrieved from ‘https://runescape.wiki/w/The_Mighty_Fall/Quick_guide?oldid=35771407’
Categories:
Hidden categories: