From the RuneScape Wiki, the wiki for all things RuneScape
Jump to: navigation, search
The Old School RuneScape Wiki also has an article on: osrsw:Ur-pel

Ur-pel is a Dorgeshuun cave goblin, a race of intelligent cave-dwelling creatures that inhabit the caves beneath the greater Lumbridge area.

Ur-pel is currently an honourary member of the Dorgeshuun Council, a group of seven Dorgeeshuun led by Ur-tag. It is the council's job to ensure that their capital, Dorgesh-Kaan, is run properly. Because of this, Ur-pel is a distinctive figure amongst the Dorgeshuun, and one of the most important inhabitants of the city. 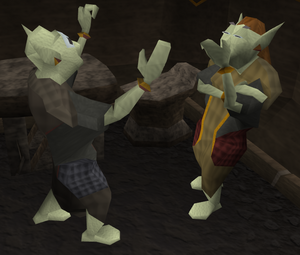 Ur-lun and Ur-pel discussing the colour of the guard's armour.

He is one of the cave goblins that can give the player the permission to sell food to Gourmets in the Dorgesh-Kaan market trading minigame.

Ur-pel is cautious when it comes to the surface. Due to the gods' dangerous behaviour in the God Wars, Ur-pel is afraid that the gods will discover Dorgesh-Kaan and destroy it, as Bandos destroyed the peaceful goblin civilisation of Yu'biusk. Although the Edicts of Guthix prevent the direct intervention of the gods in Gielinor, he is still wary.

Ur-pel is located on the south end of Dorgesh-Kaan (south of the marketplace), go up the stairs then down again. When you see the furnace on your minimap, pass the wire machine, then turn right and head to the goblin roasting a frog on the spit and head straight down the corridor until you reach a room at the end where Ur-pel will be with Ur-lun.

This information has been compiled as part of the update history project. Some updates may not be included - see here for how to help out!
Retrieved from ‘https://runescape.wiki/w/Ur-pel?oldid=35582521’
Categories:
Hidden categories: