From the RuneScape Wiki, the wiki for all things RuneScape
Jump to: navigation, search
The Old School RuneScape Wiki also has an article on: osrsw:Dorgesh-Kaan–Keldagrim train system
"Train system" redirects here. For the dwarven network, see mine cart.

The grand opening of the train route

The Keldagrim Train Station, where those wishing to visit Dorgesh-Kaan must travel

The Dorgesh-Kaan–Keldagrim Train System is a railway link created between the cave goblin city of Dorgesh-Kaan and dwarven capital Keldagrim before and during the Another Slice of H.A.M. quest. It is accessible after the quest is complete.

When Dorgesh-Kaan was opened by the Dorgeshuun tribe, the dwarves of Keldagrim were quick to look for ways to begin trade with the city. The Consortium immediately sent Ambassador Alvijar to the city to begin negotiating a possible method of quick transport between the two subterranean capitals. It was eventually decided that the dwarves would construct a large, steam-powered train that would run between the cities.

However, difficulties soon arose. The Dorgeshuun Council was unsure about encouraging such a large effusion of newcomers into the city, especially with the large amount of humans already visiting. After much consideration and heated arguments, the dwarves and cave goblins began digging a massive tunnel that stretched for miles underground.

A short way into the project, however, more problems arose. Part of the tunnel was built through a previously unknown battle site left over from The Dorgeshuun Civil War. The cave goblins wanted to excavate before the tunnel was dug any further, which could risk the artefacts' safety. The delay nearly cost the Consortium a large sum of money. 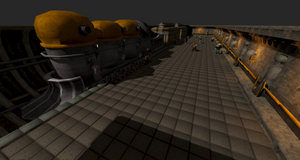 Yet another problem soon arose. The extremist H.A.M. cult, who had already tried to have the Dorgeshuun wiped out on two separate occasions, attempted to have the cave goblins' champion crushed by the train as it began its first trip between the cities, which would have resulted in a massive, devastating war between the two races. Only very narrowly was the disaster averted. Soon after, the train was opened for public use.

Some time after the train's completion, during The Chosen Commander quest, Dorgesh-Kaan was invaded by an avatar controlled by the god Bandos himself. The Dorgeshuun attempted to use the train to evacuate the city's children staying in the Dorgesh-Kaan public nursery, but the Consortium refused to comply for fear that the avatar would pursue the train into Keldagrim. The avatar was slain by an adventurer and the Dorgeshuun hero Zanik before it could launch a full attack on the city, narrowly saving those still inside.

The train system is located in the south-west corner of the second level of Dorgesh-Kaan and the south-east corner of Keldagrim just south-east of the Blast Furnace, through the entrance in the wall. This system differs from other transport methods of RuneScape in that the vehicle does not take off when the player clicks the vehicle or the associated personnel, but acts more like a real-life Metro system in which the passenger walks into the train and after staying in the compartment for a while the train takes off. A short cut scene is displayed during the trip, and the player will then arrive in the opposite city's station.

There is one train every 20 seconds - the timer is triggered when the player enters the train, including when they just arrived to a station after travelling. If you do not exit the train, or leave and return within 20 seconds, you would be sent back to the other station when 20 seconds is up.

The goblins and dwarves allow the player to travel on the train for free as thanks for the help given during Another Slice of H.A.M.