From the RuneScape Wiki, the wiki for all things RuneScape
Jump to navigation Jump to search
Drorkar? (edit) 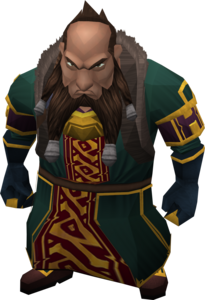 Drorkar is a dwarf who features heavily in the quest Perils of Ice Mountain. He has also written one book, mentioned in issue 24 of Postbag from the Hedge.

Drorkar is an agent of the Consortium, the dwarven governing body of eight companies that rules the Dwarven Realm from the city of Keldagrim. He does not seem to be aligned with a particular company, though, and may be working for the Consortium as a whole.

Drorkar, like many dwarves, is a supporter of industry, particularly the coal-burning and steam engine devices the dwarves are famous for. His writing reflects his beliefs, his most famous work being 1001 Uses for Soot: A Celebration.

Drorkar has butted heads with C.A.R.E., an environmental group dedicated to protecting Gielinor's environment. The organisation feels that his works will only worsen carbon emission levels in Gielinor.

Drorkar owns the dragon power station. He does not believe that global warming exists, and happily exploits the traits of dragon hatchlings (that they are the most efficient "furnace" available) for his own uses in the power station. During the quest Perils of Ice Mountain, he responded to Nurmof's request for a power station to power his new pickaxe machine along with Brother Bordiss. He believed that Bordiss' design, which relied on wind energy, would not be enough for Nurmof and went out with Bordiss under the pretence of drinking the day before the presentation. When Bordiss was drunk, he stole the blueprints and Bordiss left in shame the next day, forcing Nurmof to pick Drorkar's design.

An adventurer who had passed by to help a delivery dwarf learned about the station's origins. When it started melting Ice Mountain and endangering the local environment, they helped Bordiss fight back and Nurmof agreed to his design. With the new power station built, Drorkar claimed he was holding off a new Ice Age, which Nurmof ignored and dismissed him.

Drorkar was mentioned in the 24th Postbag from the Hedge, more than six months before he was released in-game.

Following the release of the Invention skill, players with level 40 Invention can head to Drorkar's workshop in the west side of Keldagrim Palace, where they can consult Drorkar about the Dwarven tech tree. It is possible some players find they need to complete the quest The Giant Dwarf in order for Drorkar to be present in the workshop at all. If the player has also completed Perils of Ice Mountain, he thanks you for showing him the error of his ways with the power station, and states he is much happier now that he has taken up steam-based Inventing.

This information has been compiled as part of the update history project. Some updates may not be included - see here for how to help out!
Retrieved from ‘https://runescape.wiki/w/Drorkar?oldid=35729946’
Categories:
Hidden categories: