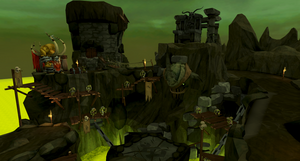 The arena for the Kyzaj Tournament.

The Kyzaj Tournament is a traditional Bandosian event held on Yu'biusk to determine leadership among Bandos' forces. It is a combat tournament in which each participating race puts forth a representing champion to do battle. The winner becomes the leader of Bandos' army until the next tournament is held. The losing finalist must be allowed to live, and serves as the winner's lieutenant.

During The Mighty Fall quest, the latest Kyzaj Tournament is arranged after conflicts arise between the leaders of the remaining Bandosian forces while they plan to exterminate the Dorgeshuun. Zanik is chosen as the champion of the Dorgeshuun, but the player decides to fight in her place, serving as her 'trained attack beast' as she would be killed as soon as she set foot on Yu'biusk. Zarador's role is the tournament Arbiter, and he announces and oversees each battle, with generals Bentnoze and Wartface acting as commentators. In total, eight races are represented in the tournament; goblins, ogres, ourgs, trolls, orks, cyclopes, hobgoblins, and cave goblins.

In the first round:

In the second round:

The remaining participants in the final round are the player and General Graardor. They do battle using the Kyzaj, and the player eventually defeats the ourg.

As a result of the player's victory, Zanik is declared the leader. However, Zarador intervenes and throws Zanik into the arena in an attempt to persuade the player to kill Zanik to show their devotion to Bandos. According to the tournament rules, the cave goblins are forfeit from the tournament if she is killed, but the player will be recognised as the strongest and the Bandosians will not invade Dorgesh-Kaan. If the player spares Zanik, then Graardor becomes her lieutenant as per tradition, but he refuses to associate himself with her and angrily leaves. If the player kills Zanik, then the Dorgeshuun are disqualified, resulting in Graardor being the winner, although he has not decided on a lieutenant.