The Ogre Enclave is a dungeon located in Gu'Tanoth. It requires partial completion of the Watchtower quest to enter. The entrance to the enclave is in the western part of the ogre marketplace in the centre of Gu'Tanoth. During the quest, the player must use a cave nightshade on the ogre guard to gain entry. After the quest, this is no longer required. The cave contains the crystals for the Watchtower quest.

This enclave is a good training spot, as there are caged and uncaged greater demons here, as well as blue dragons and safe spots. There tends to be fewer players seeking blue dragons here than in the Taverley Dungeon. It is also fairly close to a bank. There is a very good spot in the west of the enclave where there are 2 blue dragons (even high level players will only need 2 as they respawn very quickly) and also a small obelisk so that those using a summoning familiar to aid them can constantly recharge their summoning points without any difficulty. 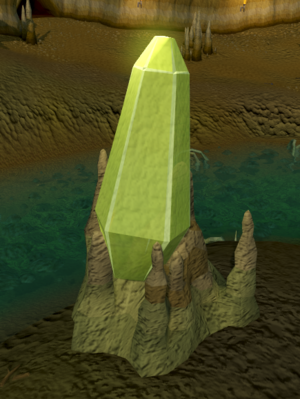