From the RuneScape Wiki, the wiki for all things RuneScape
Jump to navigation Jump to search
The Old School RuneScape Wiki also has an article on: osrsw:Morytania Spider Nest

The Araxyte Hive is a dungeon found south-east of Port Phasmatys and north of Darkmeyer that is home to the Araxyte race, and the location where the Araxxor boss fight takes place. The cavern can be accessed by using the shortcut on the southern wall of Port Phasmatys (requires 92 Agility) or by accessing the western gate of Port Phasmatys. The cocooned corpse lying outside the cave tells players how many have died against Araxxor that day, and hints what rotation Araxxor is currently on. The corpse also tells players who have obtained the Araxyte pet what achievements they need to get in order to get a new skin for him.

Once inside the lair, it is required to cross a small river of acid. To start a fight with Araxxor, players must attempt to open a "webbed entrance" at the end of the path, and are given the options on whether or not to create an instance or enter the non-instanced version of the fight.

A graveyard where the gravestones of players who die to Araxxor can be accessed by right clicking the entrance. 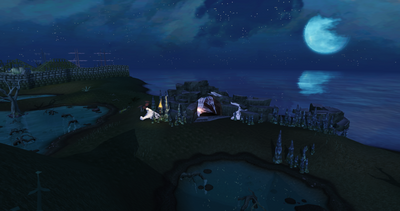