The Witchaven Dungeon is a dungeon located below the Pillars of Zanash near Witchaven. The dungeon is used in a number of quests and is the home to a number of monsters, so it may be advisable to bring food if you are a lower level player.

The entrance to the dungeon

When you enter the dungeon you will come into a room containing aggressive level 35 hobgoblins. To the north lies a section which leads into 3 rooms. The north and south rooms contain level 67 ogres. The east room contains two hellhounds.

To the north and south of the hellhounds are two rooms with levers in and outside of them. In order to get into the room containing hellhounds, you'll have to solve a puzzle involving those levers.

(If you logout while doing the puzzle you will have to start over.)

Note: You only have to do the puzzle once to gain access to the hellhounds. If you leave and come back much later you can simply walk into the room via the door and it will not be locked. 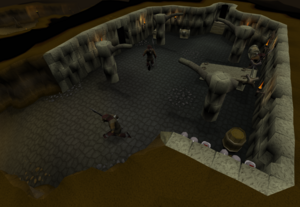 The second section will be discovered during the Slug Menace quest. This part of the dungeon is filled with level 58 Giant lobsters. Players will also fight a level 74 Slug prince later in the quest near the end of the hall. There is also an agility shortcut which makes passage through the dungeon much quicker. Finally at the very end of the dungeon is the prison where Mother Mallum probably stayed through her years of imprisonment. Once you start Kennith's Concerns there will be a mine with two female villagers guarding it near the imposing doors.

The third section of the dungeon is accessed during the Kennith's Concerns quest. There are a series of puzzle rooms which must be traversed. The room at the end has the NPCs Clive and Katherine, and at the end of the quest, Kimberly as well.

The second and third maze rooms have 6 rubium veins each. All veins are replenished upon exiting and reentering the room. The most efficient way to fill super explosive shaker with 100 rubium would be mine the 6 veins in the 3rd maze room after the Kennith's Concerns quest and exit the room through the east door. Re-enter, mine and repeat. Since the veins are closer to the east door this is the fastest approach.

The dungeon was made over 150 years ago, as a cover to hide the magical prison Mother Mallum had been trapped in by the Temple Knights. Its entrace was built in the middle of a shrine to Saradomin, and was abandoned when the city Witchaven was founded some time later.

The shrine slowly became the ruins they are today, until year 169 of the Fifth Age when Mayor Hobb, under the influence of the sea slugs, tried to release Mother Mallum.

The following quests are involved with the dungeon:

This information has been compiled as part of the update history project. Some updates may not be included - see here for how to help out!
Retrieved from ‘https://runescape.wiki/w/Witchaven_Dungeon?oldid=35720039’
Categories:
Hidden categories: