The dungeon is divided into three zones. The zones look interconnected on the map, and even in the dungeon itself you can occasionally see from one zone into another through walls of iron bars. The zones, however, are completely separate. To pass between zones, the player must exit the dungeon and travel on the surface world to the entrance of the next zone.

The dungeon map colour-codes the zones for clarity. On the minimap in RuneScape, the zones are not visually separate, making it hard to distinguish them. This can making navigating the dungeon confusing and likely is an intentional feature of the Clock Tower quest.

Despite its large size, the dungeon is rarely used except for players on the Clock Tower and Monk's Friend quests. It contains no special monsters or treasure worth collection. Players could train on the monsters here, but there are plenty of monsters to train on in more accessible locations.

This is the largest zone, and most of the Clock Tower quest occurs here.

Some of the Clock Tower quest occurs here. 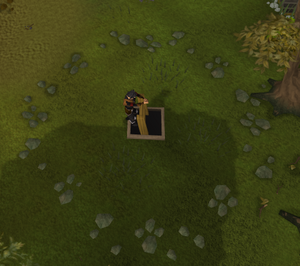 The ladder to zone 3 is only visible inside the stone circle.

This is the smallest zone and has no importance in the Clock Tower quest. Instead, thieves use it as a hideout in the Monk's Friend quest.

This information has been compiled as part of the update history project. Some updates may not be included - see here for how to help out!
Retrieved from ‘https://runescape.wiki/w/Clock_Tower_Dungeon?oldid=35522398’
Categories:
Hidden categories: