From the RuneScape Wiki, the wiki for all things RuneScape
Jump to: navigation, search
The Old School RuneScape Wiki also has an article on: osrsw:Fairy Resistance Hideout

The Fairy Resistance Hideout (or Zanaris Fairy HQ on the world map) is a secret location found during A Fairy Tale II. Here the Fairy Queen and her loyal subjects are hiding from the Fairy Godfather, who has illegally taken control of Zanaris. During the quest, the player must help cure the queen and restore her to health. After the quest, the queen and her councillors are running the resistance against the Fairy Godfather and are planning their campaign to regain control of Zanaris.

This area is also a major location for A Fairy Tale III, serving as a rendezvous point between the player and the Tooth Fairy. 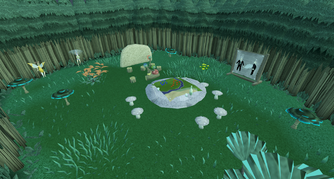 The briefing room in the hideout.

Players must have at least started A Fairy Tale II and found Nuff's certificate. With the certificate in inventory, players can reach the hideout by using the Fairy rings in this sequence:

The certificate is not needed after starting A Fairy Tale III - Battle at Ork's Rift.

A map of the hideout[edit | edit source]

This is the fairy ring that gives access to the hideout.

This is where the player helps cure the queen during the quest. The room also has some medical tables, first aid boxes, and crutches (too big for fairies, though), all of which the player cannot use. Hurt, injured, and wounded fairies are found on several of the beds. They cannot be talked to.

This room contains a map table, some tactical map frames, and some wall maps. After the quest, the Fairy Queen is here with her Council of War, planning how to regain control of Zanaris. There is also a picture of the Fairy Godfather to the south and a projector, which the Tooth Fairy plays numerous briefing footage through. The Fairy Army general, the Tooth Fairy, is also present in this room.

This room contains many crates, barrels, and crates of wands. After the quest, the player can search the crates but will not find anything. It contains a few hammers and secateurs for use within A Fairy Tale III.