Ah Za Rhoon, which means Magnificence floating on water in an ancient language, was an ancient temple in Karamja that was built by Zadimus and destroyed by Rashiliyia. After being lost for many years, the temple became a legend, making many doubt its existence. This temple is visited during the Shilo Village quest.

The temple is located in the eastern island of Karamja, at a waterfall located roughly to the east of Shilo Village. From Tai Bwo Wannai, travel east and cross the agility log (requires 32 Agility) and then follow the river bank south until you reach a mound of earth near the waterfall.

If you have access to the gnome glider network, you can travel to Al Kharid, take the glider to the Gnome Stronghold, and then take the glider to "gandius" (Karamja). From there, walk a little north-west to reach the mound of earth.

"Search" the mound and click the option to use your spade to dig it up, the one on your tool belt should work. Light your torch and use it on the fissure to illuminate it - you will lose the light source. Add a rope to the fissure, securing it to the lip. Search the fissure again to climb down into the temple below - 32 Agility is a requirement. After a short period of time, the earth forms back over the entrance. Your light source and rope will be permanently in place.

Inside the temple[edit | edit source]

After entering the dungeon, you'll encounter some level 44 and 46 undead ones. If you do kill the ones that look like zombies, a cloud of harmful gas will hit you for minor damage for four hits.

With a chisel, you can retrieve a stone-plaque from the strange-looking stone near the round pond, which can be sold to Yanni Salika after the quest for 100 gold.

In this first area, the water appears to form an arm and hand, with the fingers encircling a round pond. To access the second area of the cavern, look around the wall, west of the 'hand of water' and the smashed table, for a cave-in; search the cave-in and crawl through.

The second cavern, which is "N" shaped, plays a major part during the Shilo Village quest. During the quest, this area will contain a tattered scroll, a crumpled scroll, and Zadimus' corpse. After the quest, players may return to this area, but there will not be much to do apart from killing undead ones. 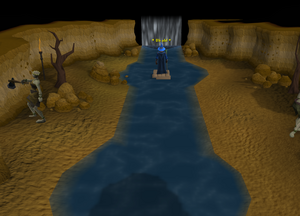 To leave the dungeon, you may simply use a teleport. Before lodestones made teleporting out of places easier, a popular way to get out was to go back into the first cave; find the smashed table, craft it into a raft, and then use it to exit the dungeon. Sometimes, you get the message that there isn't enough wood left. In this case, you could continue through the first cave, along the route of the water, to find some waterfall rocks that you can search to exit. This isn't recommended because if you fall while exiting through the waterfall you will take a lot of damage.