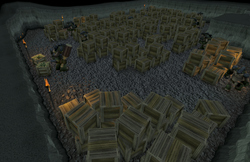 The player obtains goutweed by getting to the storage bin on the southern wall of the storeroom. Troll guards, however, patrol the room, which is like a small maze because of the many crates there. If a guard sees the player, it will throw its club at the intruder with surprising accuracy, knock them unconscious and causing 0-60 points of damage. Fortunately, the trolls are not bright enough to secure the player in the prison. Instead, they will drop the player right outside the storeroom. Note that the Protect from Missiles prayer will save you the damage from the club, but will not prevent you from being knocked out. Sometimes if the player runs through a guard, it may not see the player even if he is one square away; this happens especially near the door to the room.

A guard only sees the player if it is directly facing the player and within (approximately) five squares of the player. The key to reaching the goutweed is to run through parts of the maze when the guards cannot see the player. There are several routes players can take, and players can use safe spots that no guards ever examine. The safe spots are U-shaped areas with boxes on three sides.

Run to the first safe spot, which is the one in centre of the third row of boxes from the entrance, when the trolls patrolling the first row and the eastern second row just pass you. At the first safespot, watch the two trolls patrolling the easternmost column of boxes. Wait for the troll which travels north on the western side to make the turn to the east, then run to the safespot on the southern side of the third row. Wait until the troll guard approaching you from the south has turned the west, then run to the crate with the goutweed. Make sure that you are standing to the side of the crate or you will get caught.
Surge works in the stronghold, potentially making it easier to avoid guards.

Players that reach the goutweed crate must search it to get one piece of goutweed. Upon taking it, though, the sleeping guard will wake and toss his club at you, causing up to 60 damage. You will reappear outside the storeroom. The guard, strangely enough, does not confiscate the goutweed from you, and will go right back to his nap.

Alternatively, you can just click by the goutweed box on your map, and you will make it there after a few tries.