From the RuneScape Wiki, the wiki for all things RuneScape
Jump to: navigation, search
The Old School RuneScape Wiki also has an article on: osrsw:Waterbirth Island Dungeon

Waterbirth Island Dungeon is a large and very dangerous dungeon found under Waterbirth Island and consists of several sublevels that contain powerful, aggressive monsters. Players must be prepared to encounter all three combat styles. Few safespots are available, so adventurers who wish to explore the dungeon must take caution.

As soon as the player descends the stairs to enter the dungeon, they will be in a massive cavern, also known as sublevel 1, filled with level 78 Dagannoth with numerous eggs dotting the walls, releasing dagannoth spawns to attack the player. The western half of the dungeon also contains some small rock crabs in boulder form.

There is also a small summoning obelisk to the east, near the gates. The gates can be opened by a single player, and there are three paths to choose from.

Depending on which path is taken, the player will encounter the following monsters that use one of three attack styles:

It is worth noting that sometimes a few melee Dagannoth may have been stuck inside any of the rooms.

Opening the door to the central room[edit | edit source] 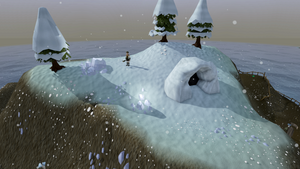 On top of Waterbirth Island with Askeladden.

Each of the three paths leads further east to a central room with a ladder. However, it is blocked by three door-supports. The props can be knocked down with any attack; and it is possible to knock multiple door-supports by using multi target attacks, such as chain or hurricane.

Once the props are knocked down, and the player gets close to the ladder, the two eggs will release their spawn to attack the player, though the player can simply climb up or down before they have a chance to attack.

Rooms in sublevels 2 to 5 may contain:

At a dead end, players can find Bardur, who is fighting Dagannoth Fledglings. If the player gives him certain equipment to keep him going, he will hand the player a cooked shark in return, which may prove a bit helpful if the player wishes to explore the dungeon further.

If players continue on the other path, they will eventually find themselves in a bent area containing numerous rock lobsters, that attack with rapid melee. Eventually the path smooths out into a large chamber containing a mix of wallasalki, both types of dagannoth and giant rock crabs, all of whom are aggressive. There is a ladder surrounded by a pile of rocks and stalactites that provide a safe area for the player to rest. Heading down this ladder will lead to the Dagannoth Kings' arena.

If players continue down the passageway past the ladder, more rock lobsters will be found, with ladders leading back up a different area of sublevel 2. At sublevel 2, there is a final ladder, which if used, will bring players to the Lighthouse dungeon. In order to use this ladder, Horror from the Deep must be completed.

In this area reside the Dagannoth Kings in an islet surrounded by water. Each Dagannoth King is extremely powerful, and players should come prepared before fighting them.

During Blood Runs Deep, players gain access to a dungeon near the southern end of Waterbirth Island. It is the home of the Dagannoth Mother, two Dagannoth Sentinels, and many Dagannoth guardians. After the quest, only the guardians remain, since the player trapped the Mother and killed the Sentinels during the quest.

Cannons may not be placed in this area of the dungeon.