The Asgarnian Ice Dungeon is a moderately large dungeon in Asgarnia. It is found south of Port Sarim and north of Mudskipper Point (fairy ring AIQ), under a trapdoor. This dungeon is particularly dangerous to low level players, as every monster within it is aggressive. The dungeon is also crucial to The Knight's Sword quest as this is the only location in RuneScape that contains blurite rocks, allowing players to mine blurite ore. As of 17 October 2011 the dungeon was given a new harder layout to travel through to help lower the quantity of bots in that area.

When walking, go to Port Sarim and head south from the Port Sarim Jail, past a grove of willow trees. Go up the small hill and you will arrive at the trapdoor.

For faster transportation, players can use: 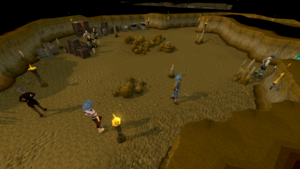 The pirates' area of the cave.

Descend down the trapdoor to appear in a chamber by the bottom of the ladder. Walk west a ways and you will see many level 22 muggers. They often drop rope, so they are one of the few sources of free rope for players on tight budgets.

If players head north, they will find themselves in a large room full of level 26 pirates. This room has a few respawn points of coins (no more than 5 coins each spot). There are several chests here; most are empty but some occasionally contain a pot or a few coins. There is also a cross in the middle of the room.

There are two paths that lead east. A few hobgoblins, include several level 40s and one level 46, wander around here. Regardless of the path you take, you will end up in the same place, at the heart of the ice caves. This is where the dungeon becomes dangerous, especially for lower-level players, because of the large number of ice warriors patrolling the area.

Near the eastern wall of the central cavern are a few ice giants. The giants are popular to kill, as they drop big bones as well as mithril and Black items. It can be troublesome to try to attack the giants, as the aggressive, quick ice warriors often will attack first. It can be done, however, by using run, dodging around obstacles in cavern (which can hinder the warriors), and hugging the eastern wall (where fewer warriors go). Eventually while training here, the warriors and giants will become non-aggressive and players can attack freely.

It is recommended to bring plenty of food with you when training on ice giants or ice warriors. Using prayer can be useful, as there is an altar a bit north-west of the entrance to the dungeon. Fire spells work well against all of them.

The blurite rocks are found at the eastern and southern edges of this cavern.

The entrance to the chamber containing the Skeletal Wyverns is in the south of the central ice cavern. There is also a crumbling wall shortcut available to players with level 72 Agility to the east of the entrance of the dungeon. This chamber can be entered only by members. It is a very dangerous place, because of the wyverns, and players should be thoroughly prepared against the monsters before entering the chamber. Inside the skeletal wyvern cavern is a crevice that will lead down to their living counterparts, where the climate is even colder and they are much more dangerous.

The ice warriors and ice giants cannot attack any player standing in this spot under any conditions, and ranging/maging them from there usually results in the targeted monster retreating a distance away. This is a good place to rest up and wait for the blurite to respawn, or perform a teleport without being interrupted. 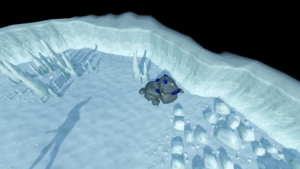 This information has been compiled as part of the update history project. Some updates may not be included - see here for how to help out!
Retrieved from ‘https://runescape.wiki/w/Asgarnian_Ice_Dungeon?oldid=35570812’
Categories:
Hidden categories: