From the RuneScape Wiki, the wiki for all things RuneScape
Jump to: navigation, search
Not to be confused with Underground Pass.

The Galarpos Dungeon is a series of partially caved in, winding tunnels beneath the Galarpos Mountains separating Tirannwn from the rest of the continent. It is accessible only by descending the hollow trunks of two old dead trees growing on either side of the mountains. One is north of the Observatory's crystal tree location, the other north-east of Lletya. The tunnels contain several reservoirs of ground water seeping through the mountains.

The dungeon is visited during The Prisoner of Glouphrie, where it is traversed with the aid of Golrana in order to reach Arposandra. 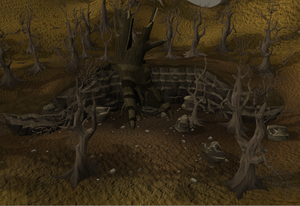 One of the old, dead trees

From the east side of the pass[edit | edit source]

From the west side of the pass[edit | edit source]