From the RuneScape Wiki, the wiki for all things RuneScape
Jump to navigation Jump to search
The Old School RuneScape Wiki also has an article on: osrsw:Pyramid Plunder

The unofficial world for Pyramid Plunder is world 64 (P2P).

Pyramid Plunder is a Thieving minigame located in the city of Sophanem at the far southern reaches of the Kharidian Desert. Inside Sophanem, the Jalsavrah Pyramid can be found with four "anonymous-looking doors"; access to the minigame can be found by searching one of the doors, guarded by the Guardian mummy.

During the minigame, the player has five minutes to plunder the contents of Jalsavrah. The pyramid consists of eight rooms, each requiring progressively higher Thieving levels to enter and loot. Artefacts pillaged from the rooms range from ivory combs to jewelled diamond statuettes, with the most valuable artefacts found deepest in the pyramid.

Rarely, players may find a Pharaoh's sceptre within a grand gold chest or within a sarcophagus inside Jalsvarah. A Sceptre of the gods can very rarely be plundered from the engraved sarcophagus in the 8th room, requiring 91 Thieving to access and 75 Runecrafting to pry it open. Pieces of the rare Black ibis outfit can be found within the urns or sarcophagi inside of the pyramid.

Teleport to Al Kharid, and use the magic carpet network to get to Sophanem. Speak with Tarik south of the Jalsavrah Pyramid near the northern gates of the city. He'll explain the pyramid, the dangers within, and explain the collection and selling of artefacts to Simon Templeton.

When you enter a room:

As soon as the player starts the minigame a timer will appear on screen. Players have five minutes to plunder as many artefacts from the pyramid as they can before the timer is depleted and the Guardian mummy teleports the player out.

Inside Jalsavrah, the player will find a room that contains the door through which they entered, a speartrap, urns, a golden chest, a sarcophagus, an exit door, and four doors leading to the next room, of which three leads to a dead end. There are eight rooms in total, the first requiring 21 or higher Thieving to enter. Each subsequent room requires ten more levels than the previous room, with the final room requiring 91 or higher Thieving. These are hard requirements, meaning boosts will not work in any capacity. 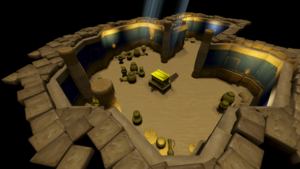 A chamber inside the pyramid. 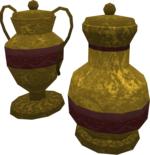 Each room inside Jalsavrah has 13 urns, with the exception of room 3 which only has 12 urns. Players may choose to search or check urns.

Checking an urn will check for traps. On successful checks, player will find a snake inside the urn. It may then be charmed if the player has a snake charm allowing the player to search the urn for artefacts without fear of activating a trap.

Searching and checking urns rewards the player with Thieving experience, but charming snakes does not. If charming snakes, experience awarded from successfully looting an artefact will be reduced by 33%. Unless charmed, a snake may bite the player, poisoning them.

Searching is much slower than stealing, and the rewards from urns are generally poorer than from the golden chest and sarcophagus. Rewards also get better the further one ventures into the pyramid.

The Menaphyrite gem may be obtained rarely while looting urns.

In the centre of each room the player will find a grand gold chest. Looting the chest will award the player with higher value artefacts than they would find in the urns nearby. A Pharaoh's sceptre may rarely be obtained from golden chests; if a sceptre is found, the Guardian mummy will appear and escort the player out of the pyramid, ending their plunder.

Occasionally the chest may contain an aggressive level 112 scarab swarm, which attacks extremely quickly and poisons. Scarab swarms will not follow players to the next room of the pyramid. Chests are often saved until everything else in the room has been looted, as scarabs can slow down the process of looting urns.

A sarcophagus can be found in each room of the pyramid. Opening sarcophagi awards the player with Strength experience and artefacts, with higher value artefacts and experience obtained deeper within the pyramid.

Opening sarcophagi can take a fair amount of time, and may awaken a level 70 mummy. Players can open the sarcophagus if being attacked without interruption.

There is a chance that Jennifurr will appear when opening this sarcophagus. She belongs to the Cats of Menaphos.

Located in the eighth room, the engraved sarcophagus requires 91 Thieving and 75 Runecrafting to loot. When opened, the player has a chance of receiving a jewelled diamond statuette, a Pharaoh's sceptre, a Sceptre of the gods, or a black ibis outfit piece.

Opening the engraved sarcophagus awards Runecrafting experience. Just like with the other sarcophagi, players may awaken a mummy upon opening.

A spear trap can be seen within the wall.

The corridor to each room will contain a spear trap, taking up two game squares on each of the walls. Clicking on either of the closest squares will attempt to deactivate the trap, allowing the player to pass by unharmed if successful.

Players will be damaged by the spears if they attempt to walk into the room without deactivating the trap, fail to disarm the trap, or click on either of the farther squares.

Faint signs of a door can be seen behind worn paint.

Four locked tomb doors are hidden in the walls of each room, only one of which leads to the next room. Players must successfully unlock the tomb doors until the correct one is found, allowing them to reach the next room.

Successfully unlocking a tomb door awards some Thieving experience. A lockpick or hair clip will significantly reduce the chance of the player failing to unlock the door, at the cost of halving the experience gained.

A quick escape from the dangers within.

The door leading to the next room will change each time a player joins the minigame. It is possible for groups of players to play the minigame together and quickly search all doors in a room at the same time. The other players can then follow the player who found the correct door.

Each room has an exit door, allowing for a quick escape via the right-click menu. Monsters will not follow players through the doors.

Failing obstacle and trap attempts will result in the player taking damage; the minimum a player will take from failing to loot urns is 50 damage. Damage is scaled, based the players maximum life points, increasing in damage as the player progresses deeper in the pyramid.

It is generally recommended for players to search urns in only the two highest level rooms they can access; to maximise experience rates the player should attempt to loot every urn in their highest accessible room, and as many urns from the second highest room as time would allow. Players using this method should always be aware of their time spent in the pyramid; it is advisable to move on to the last room after half of their time is remaining.

When the player is in their highest level room and time is running out, prioritise looting the golden chest for a chance at better rewards. If the player still has time remaining after, resume plundering urns until kicked out.

After completion of The Light Within quest players can use of the Crystal Mask spell in conjunction with the Light Form prayer to reduce the rate of failing when checking and searching urns significantly. Wearing Prayer boosting items and drinking a Prayer renewal potion will allow the player to do multiple trips into the pyramid without the need of banking, or recharging their Prayer points.

Unless the player plans to teleport to a bank after each pyramid plunder, food or a healing familiar is the only item necessary to play the minigame for extended periods of time. It is possible for mid-to-high levelled players to make it through several rounds without needing to heal. The equipment below is needed to withstand the damage from monsters and poison during a plundering trip. If the player wishes to reduce banking time, one full inventory of food and potions can last from four to sixteen games depending on how often the player consumes the items. To save time, it is best to eat in between games unless absolutely necessary.

Quick banking can be achieved by using a ring of duelling, ring of kinship, or TokKul-Zo to teleport to nearby banks at Castle Wars, Daemonheim, or TzHaar City respectively. After, a Pharaoh's sceptre or Sceptre of the gods to return to the pyramid if possible. If the player has completed the Contact! quest, use of the bank in Sophanem is another option. A Summoning obelisk can be found along the east wall outside Sophanem, and an altar just southwest of the pyramid. If one is unable or not willing to use the Pharaoh's sceptre, the Menaphos Lodestone just east is a fast and free alternative.

A player teleporting with the Pharaoh's sceptre.

The Sceptre of the gods

Occasionally, players may also find the Pharaoh's sceptre in one of the Grand Gold Chests or Sarcophagi, worth 8,175,845 coins. Immediately after finding a sceptre the player will be expelled from the pyramid. Players inside the pyramid will see an Annoyed guardian mummy standing beside the chest in each room when this happens, and will announce the fact.

Rarely when looting urns and sarcophagi within Pyramid Plunder, players may receive a piece of the Black ibis outfit. When wearing pieces of this outfit the player will gain additional Thieving experience, up to 5% when wearing the whole set. Wielding a Sceptre of the gods will increase the drop rate of outfit pieces. If the player's inventory is full, the outfit piece may be retrieved from Diango. The player will receive the chatbox message: "You find a piece of Black Ibis clothing. It can be reclaimed from Diango."

The gemstone menaphyrite may be rarely looted from urns. After completing The Jack of Spades and speaking to assistant librarian Subotai, it may be registered in the Menaphos journal. One may uncommonly receive a small Menaphite gift offering as well. Upon looting a sarcophagus a cat named Jennifurr has a rare chance to spawn.

The eye of horus
Retrieved from ‘https://runescape.wiki/w/Pyramid_Plunder?oldid=35982805’
Categories:
Hidden categories: