Tomb of the Fallen 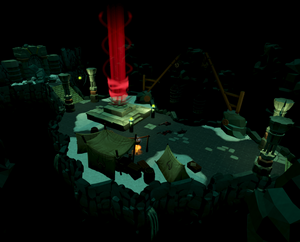 The Tomb of the Fallen is a crypt explored by the player and Sir Owen during The Death of Chivalry. It can be accessed through the portal on the roof of the Black Knights' Fortress, accessed via Dulcin's office. Alternatively, players who have completed the quest can use the Skull of Remembrance to teleport to the portal directly.

The tomb is located somewhere in the frozen wastes north of Trollheim, and was constructed during the God Wars as a resting place for fallen Saradominists. As the God Wars continued and fatalities climbed, the tomb's capacity was quickly exceeded, leading to its use as a mass grave. This is evidenced by the heaps of skeletons that remain in the tomb to this day.

In the first room, there are two doors, to the east and the west. The western door is blocked by ice and debris and is inaccessible. However, it may lead to the Saradominist temple north of the entrance to the God Wars Dungeon, which shares its architectural style with the tomb, and was built around the same time and place. The eastern door leads deeper underground, through the catacombs and eventually to the resting place of the Wand of Resurrection.

After completing The Death of Chivalry, members can return to the tomb for additional rewards including experience lamps, a cosmetic Templar outfit, and a gilded cabbage. 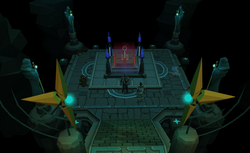 The Wand of Resurrection, found at the bottom of the tomb.

This information has been compiled as part of the update history project. Some updates may not be included - see here for how to help out!
Retrieved from ‘https://runescape.wiki/w/Tomb_of_the_Fallen?oldid=35631663’
Categories:
Hidden category: