From the RuneScape Wiki, the wiki for all things RuneScape
Jump to navigation Jump to search
Not to be confused with Sophanem Dungeon.

The Sophanem Slayer Dungeon is a Slayer dungeon located in south-west Sophanem. Entering and killing monsters within the dungeon requires level 88 Slayer and partial completion of Icthlarin's Little Helper.

The dungeon can be easily reached through the following methods:

The dungeon has several features, including signature drops which are shared by the common monsters: 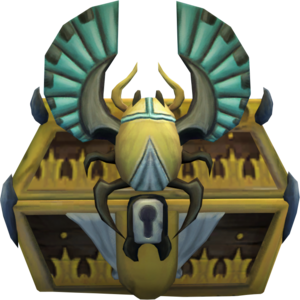 Players can collect the loot monsters drop from the chest.

Because these monsters border between life and death, they can only be killed for good with feathers of Ma'at. These feathers must be carried in the player's inventory, or they will be unable to kill the monsters, similar to fighting rock slugs without a bag of salt or salt shaker. One is consumed for each kill, unless the player has unlocked the overall reputation reward Slayer feather buff at 141,900 reputation, which has a chance of preventing the feather from being consumed. They can be obtained from multiple sources, but they are generally obtained in bulk from the Menaphite guard posted outside the dungeon.

When the monsters are killed, they will leak corruption onto the player in various stacks. They are given in 1, 2, 3, and 5% intervals, depending on the monster's Slayer level and type. For example, killing corrupted scorpions or salawa akhs (the weakest monster in their respective category) would add 1% to the player's stack. Killing corrupted workers or imperial guard akhs (the strongest in their respective category) adds 5% to the player's stack. For every stack obtained, the player takes and inflicts 1% additional damage. The normal maximum cap of this corruption is at 25%. The Magister's chamber also shares the corruption feature, though the corruption cap is temporarily doubled to 50% when fighting him; upon his death, it resets back to 25%.

The Sophanem Slayer Dungeon also has multiple chests throughout the dungeon; one at the entrance, another near the salawa akhs and a final one near the First Gate. The chest will automatically gather drops from the monsters, reducing the need to manage the inventory during a task. Players may opt to disable the auto-loot feature if desired. If this feature is disabled, there is a 20% chance for monster drops to be doubled. This bonus applies to regular monster drops as well as drops from the rare drop table. Tertiary drops will not be doubled; however, vital sparks are an exception to this and have a chance of doubling. Up to 6 can be received in a single drop if the player is on Slayer task and has vital spark enhancers in their inventory. It is highly recommended to set the chest up so that vital sparks fall to the ground for a chance to be doubled.

The chest can hold up to 30 different items at most; any new items that the chest tries to take in for storage is instead dropped by the monster onto the ground.

If the player dies with loot collected in the chest, they can either pay a small fee based on the total value of the items held inside to reclaim them, or abandon the chest and start anew; it is recommended to simply pay the fee, as it is generally insignificant compared to the value of the items held in the chest. This will appear as a dialogue box when you attempt to loot the chest, stating "To unlock the chest requires an offering of X coins". The chest will act as if it has not been toggled to collect loot if you do not pay the offering and as such all further drops within the dungeon will appear on the ground and not be teleported to the chest.

The reclaim fee does not apply if the player dies with a ring of death equipped in the main dungeon, or in the Magister's chamber, as it functions differently and is considered to be a separate location. 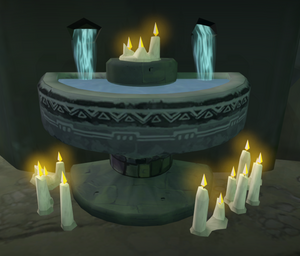 The Font of Elidinis can cleanse the player's corruption stacks.

In the corrupted worker, feline and crocodile akh areas are Fonts of Elidinis which will remove all corruption stacks the player has accumulated. There is no cooldown when using the font, although removing corruption stacks is strongly discouraged.

If a player is given corrupted creatures or soul devourers as a Slayer task, they will be able to find a hetite stone in the dungeon. Its placement is different for each player.

Inside the dungeon there are two pairs of tunnel entrances which allow teleportation between them in a pairwise manner. Before they can be used they each need to be activated by using the 'Clear Heavy rock' action on the end of the tunnel that is further away (and below them) from the entrance. After being activated they are called 'Chasm'.

The two Heavy Rocks that must be cleared are found at ground level, one south of the Feline Akhs and one west of the Gorilla Akhs.

There are twelve different types of monsters in the dungeon; six are labelled as "corrupted", while the remaining six are labelled as "akh" (soul devourer). Both types are a possible assignment from Kuradal, Morvran, Sumona, or Laniakea, though Sumona has the highest chance to assign them.[1] Some monsters can be killed for another task, e.g. corrupted kalphite marauders for a kalphite task.

There is a chance for the Menaphosian cat Katarina to spawn when killing any of the monsters apart from the Magister.