The Chaos Dwarf Battlefield is a dungeon accessible after the completion of Forgiveness of a Chaos Dwarf quest. It may be reached through the tunnel by the gold ore vein in the south-west corner of the Keldagrim mines. The Black Guard of Keldagrim battle the Chaos Dwarves of Red Axe here, to prevent them from invading Keldagrim.

The main attraction of this dungeon is the Dragon pickaxe, which you can obtain from killing the Red Axe dwarves as a very rare drop. Other items that attract players are the Hand cannon, a powerful 2-handed ranged weapon, and its ammo, the Hand cannon shot. 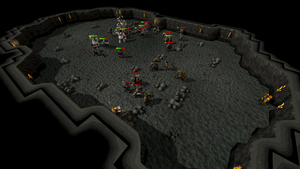 The location of the battlefield's entrance

When attacking your enemies, they are similar to the Rorarius found in the Monastery of Ascension. If you attack one of the aligned forces monsters, minus the Chaos dwogres on the Red Axe, you will attract other enemies from that faction to attack you. For example, attacking a Chaos dwarf will cause other nearby dwarfs and hand cannoneers to attack you, causing a quick death if not careful.

A good strategy to spend a long time on the battlefield is to only attack the Chaos dwogres at first, and then switch to other creatures once they become non-aggressive. This allows you to attack one at a time, greatly reducing food and potion use.

Another strategy, for players wishing to attack the dwarves from the start, is to bring a friend or two, who have done the quest, so that the dwarves don't just concentrate on attacking you.

A good strategy for players level 80-99, or with low prayer, is to go to the back near the chaos dwogres and wait for one to attack a dwarf, make sure you know which dwarf it is attacking, attack that chaos dwogre watch the dwarf it's attacking, and as soon as the dwarf dies switch on protect from melee. When the dwogre is dead, or ignoring you to attack another dwarf, switch the prayer off. This also works for chaos dwarf hand cannoneers after you have gained tolerance. If you have low life points, you can wait for the dwogre to attack a dwarf, attack the dwogre, when that dwarf dies stop attacking and wait for the dwogre to attack another dwarf, when it does attack it again.

Another useful strategy is to utilise the dwarf multicannon. One who is attempting should always use Soul Split and area-of-effect abilities such as Chain and Dragon Breath. Using the bonecrusher along with a demon horn necklace here can allow for infinite Prayer points. You should not attempt to use a dwarf multicannon if you do not have access to Soul Split.

Music tracks unlocked in this location: