From the RuneScape Wiki, the wiki for all things RuneScape
Jump to navigation Jump to search
The Old School RuneScape Wiki also has an article on: osrsw:Falador Mole Lair

The entrance to the lair.

The Falador Mole Lair is a dungeon located underneath Falador. It can be entered from Falador Park, in the northern part of the city. There is a large flower in which the lair can be entered (although a light source is no longer required as of 27 January 2014). It is home to the level 230 Giant mole, a gigantic mole who was exposed to Malignius Mortifer's Super Ultra Flora Growth Potion, and her Baby moles.

The mole is often killed for her drops of mole claws and mole skins, which can be traded with Wyson for bird's nests. These bird's nests are different from those received from Woodcutting, and can also contain lower level Farming seeds.

The entrance to the lair also doubles as an exit. 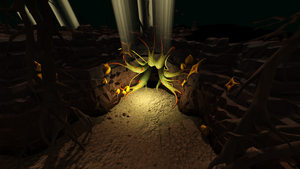 The way out of the lair.
Retrieved from ‘https://runescape.wiki/w/Falador_Mole_Lair?oldid=35681352’
Categories:
Hidden categories: