From the RuneScape Wiki, the wiki for all things RuneScape
Jump to navigation Jump to search
The Old School RuneScape Wiki also has an article on: osrsw:Safe spot 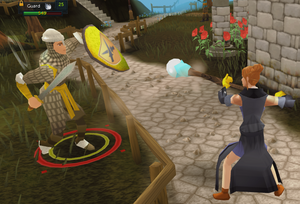 A safe spot used against a guard in Varrock, who is blocked by the fence.

A safe spot is a position from which a monster may be attacked using Ranged or Magic combat or using a halberd over an obstacle without retaliation from a melee opponent. Making attacks in this manner is often termed "safe spotting", "farcasting" or simply "safe-ing". Common examples of safe spots include fences, rocks, elevated areas and even rivers.

This works because NPCs, and some automatic player movements, always move directly toward their target and do not detour around obstacles if that would mean moving away. Larger monsters may also end up snagged on a corner, even if it looks like they do have an almost direct path.

How "safe" a spot really is often depends on circumstances:

Because the concept of safespotting is a physical action (i.e. it is recreatable in a real-life scenario) and not a quirk of the game's programming, it is possible to safe spot against other players. However, because there is a human, not a computer, behind the screen of another player, safe spotting is nearly always a temporary tactic against humans. A computer lacks the awareness to react to safe spotting whereas humans will be able to recognise that they are being safe spotted and run away or move around the obstacle.

Safe spotting against other players is also limited by the practicality of it. Most monsters, again, due to their computer control, lack the ability to stop a player from doing it. A human would see what the other player is doing and stop them, all the while forcing the safe spotter to waste time and food. Also, safe spotting, in some cases, could be dangerous as counter-safe spotting is possible (once again the adaptability of humans comes to the forefront). This reverse engineering, along with adequate protection against the original safe spotter's form of damage (Protect from Magic versus a magic-using safe spotter) can be extremely effective.

But in some cases safe spotting has serious advantages. The few free hits a ranger can get on a player using melee before they can close in to attack can make the difference between victory and defeat. Indeed, when a fight comes down to a battle of attrition (when whoever has more food wins), those two or three hits can be instrumental.

This tactic's implications are of course somewhat obvious and as such there is a small, programmed in, defence against a safe spotter in the Wilderness or anywhere. When a warrior is retaliating against (not attacking), a distanced attack, they will, during their headlong charge, apparently make their first hit on their enemy 3-4 squares before they are in melee range. This is because of the way the game is programmed, a running character is treated by the server as a few squares ahead of where they appear to be.

Players can easily train range and magic from safespots in the following places:

Safe spot can also mean an area or spot in an otherwise dangerous area where other monsters cannot attack the player (not meaning that the player can attack them safely). This meaning of safe spots are often used to complete certain quests. For example, in the Temple of Light, safe spots are considered areas where there are no Shadows nearby. 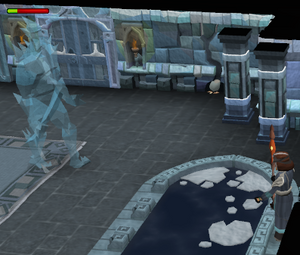 An ice giant retreating as a player is using a safespot.

Safespots are ineffective while Dungeoneering because creatures will retreat as if the player was attacking out of their wander range, forcing the player to have to go after them. This makes Daemonheim monsters unique, because most other RuneScape monsters do not retreat when unable to retaliate. However, if the player can manage trap a creature in a corner and then safespot it, the monster will be unable to retreat back, allowing the player to continue hitting it without it running back out of their weapon's range. However, even this may not be effective as NPCs could wander off the corner after a while, also forcing the player to run after them or allowing them to go around the player's safespot.

This information has been compiled as part of the update history project. Some updates may not be included - see here for how to help out!
Retrieved from ‘https://runescape.wiki/w/Safe_spot?oldid=35680753’
Category:
Hidden category: