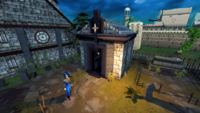 The entrance to the Catacombs. 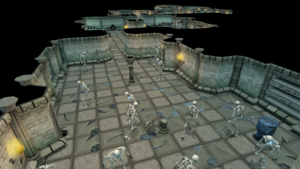 The experiments left by Dragith.

The Lumbridge Catacombs are a free-to-play dungeon that was released along with The Blood Pact quest. The catacombs have been the burial grounds of the Lumbridge church since approximately the 130th year of the Fifth Age. The dungeon is designed for low-level players and features unique monsters that drop parts of the Mask of dragith nurn.

The entrance to the catacombs are located in Lumbridge cemetery.

The Blood Pact must be completed in order to be able to access the lower level of the dungeon. The monsters are located at the bottom of the dungeon and can be accessed by the stairs in the room where Reese is defeated in "The Blood Pact" (revealed after the altar collapses).

The upper levels of the dungeon are useful only for collecting the music track and in the quest, in order to kill (or spare) the cultists. A map is shown on the right to show where the cultists are. (Many players didn't know about the stairs going to the lower level at the beginning room on the upper level, to the east/left)

The dungeon is large and has a single entrance/exit found in the yard of the Lumbridge church. It is made up of a series of rooms linked by short corridors. The first room contains warped cockroaches, which are level 1. As you progress through the dungeon the rooms contain monsters of increasing combat levels, ranging from 1 to 21, whilst the final room contains a single monster of level 26 combat. This makes the lower level an efficient and effective training location for new and low-level players, as the monsters found within are easy to kill, do not hit particularly high, and boast valuable drops relative to their combat level.

Six statuettes are found in the dungeon:

Xenia will offer to buy the statuettes for a total of 2500 coins.

Players can assemble the Mask of Dragith Nurn by using any one of the parts with another while all 5 parts are in their inventory. A common misconception is that the mask pieces are randomly dropped by every monster, but this is not true. You can use the table above to see what monsters drop which pieces. This mask is not tradeable and gives very little bonuses. Due to its low bonuses, most players simply wear it for aesthetic purposes. However, before EOC, the mask did have the highest melee attack bonuses for a head item in free to play.