From the RuneScape Wiki, the wiki for all things RuneScape
Jump to navigation Jump to search
The Old School RuneScape Wiki also has an article on: osrsw:Enakhra's Temple

Enakhra's Temple is an underground complex located south of the Bandit Camp in the Kharidian Desert. To get access to the temple, you must start the Enakhra's Lament quest. A majority of the quest takes place here.

The temple has four entrances and exits, to the northeast, south-east, south-west, and north-west of the temple's central chambers. The north-east entrance is opened as part of the quest. Each of the other three entrances cannot be used to enter the temple from the surface world until the player has first used it to leave the temple. Re-entering the temple during or after Enakhra's Lament utilises the rock immediately east of the statue's location as the entrance, rather than the method used during that quest.

Although it is a temple and is dedicated to Zamorak, Enakhra's Temple does not have a Prayer altar. 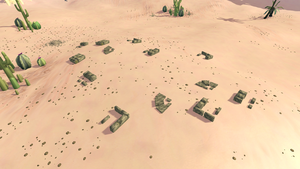 The ruined surface of Enakhra's Temple

There are several ways to get to the temple. The temple is in the hot desert, so take precautions against the effects of desert heat.

Uses of the temple[edit | edit source] 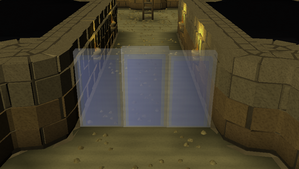 Although Enakhra's Temple is very big, there isn't much there of value or use except during Enakhra's Lament and briefly during the Mahjarrat Memories miniquest. After the quest, the temple has a furnace and a fountain that you can use, although they are inconveniently far from a bank. You can also create Camel masks here, by using soft clay on the middle level's pedestal, the one with an imprint of a camel's head.

Thus, after the quest, the temple is rarely used except for using the furnace and fountain and as a way station by players using camulets to teleport there and then walking to these nearby locations:

The temple figures into the history of the Mahjarrat, long-lived beings of great power. The mahjarrat were originally supporters of the god Zaros. A conspiracy of some mahjarrat lead by Zamorak betrayed and banished Zaros, in the process making Zamorak himself a god. From this time, the mahjarrat who remained loyal to Zaros have been enemies of the mahjarrat who support Zamorak.

Enakhra was one of the supporters of Zamorak. She built a huge temple, perhaps during the Third Age. (The time is not definitely known, but the temple's intended use suggests it was likely made during the God Wars of the Third Age.) Enakhra then contacted Akthanakos, a supporter of Zaros, and lured him to the temple on the pretext that she had repented and was changing sides. This was a lie. She built the temple in honour of Zamorak and used it to trap Akthanakos there. He was transformed into and enslaved as one of the boneguards in the temple.

After the enslavement of Akthanakos, Enakhra's Temple apparently became little used and was abandoned. As the centuries rushed by, even its location was forgotten by all but a few. In the Fifth Age, Lazim, a follower of Zamorak, sought out the temple and reopened it with the help of an adventurer he deceived, as occurs in the Enakhra's Lament quest. The result is that Akthanakos was freed, confronted Enakhra, and each, separately, called on their god to teleport them to The North. The location is not disclosed, but since both of them are mahjarrat, they are likely going to the site of The Ritual.

The temple is now mainly used by adventurers teleporting there with the camulet, en route to other destinations and for use of the temple's furnace and fountain. Lazim, however, still lurks in the temple. 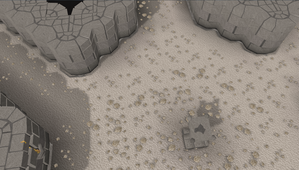 When using the OOO in Enakhra's Temple, and pressing "Q" for about 4 seconds, you find the black and white area where the cutscene takes place. 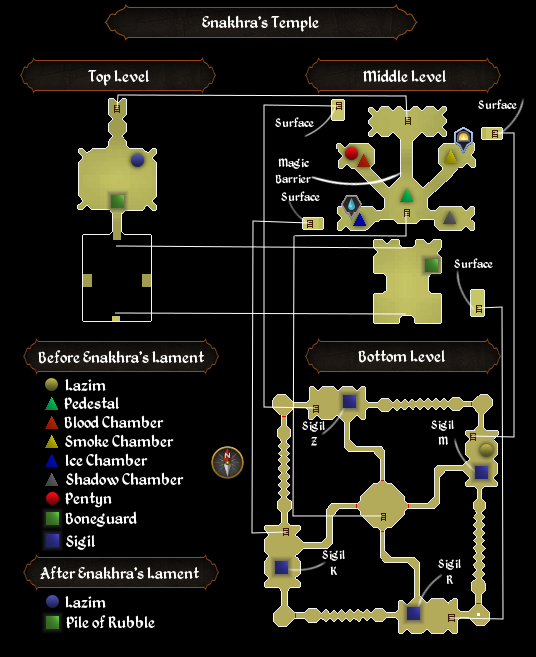 This information has been compiled as part of the update history project. Some updates may not be included - see here for how to help out!
Retrieved from ‘https://runescape.wiki/w/Enakhra%27s_Temple?oldid=35959720’
Categories:
Hidden categories: