From the RuneScape Wiki, the wiki for all things RuneScape
Jump to navigation Jump to search
The Old School RuneScape Wiki also has an article on: osrsw:Lumbridge Swamp Caves

If entering from the surface, a rope is required to descend into the hole. A spiny helmet or Slayer helmet is also advised, as several narrow passages within the caves are guarded by wall beasts, who will grab and damage players without the appropriate head protection.

Getting to the caves[edit | edit source] 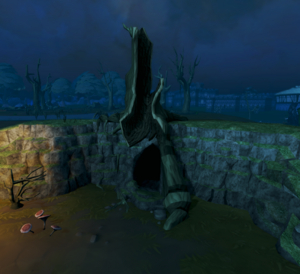 The entrance to the cave within Lumbridge Swamp

The main entrance to the caves is through the Lumbridge Swamp, located south of Lumbridge. It is located in the centre of the swamp with a

icon on the minimap. A rope is required when using this entrance for the first time. The Water altar is near this entrance.

A final route is via teleporting to the Tears of Guthix cavern with a games necklace then heading north.

The water in the caves contains various rare fish. Slimy eels can be caught with a fishing rod at level 28 Fishing, while raw cave eels require level 38 Fishing. This is the only place outside of Morytania where these fish can be caught. Additionally, frog spawn can be caught here by using a small fishing net.

The caves are home to several low level Slayer assignment tasks, such as cave bugs or rock slugs, as well as the unique wall beasts, which cannot be found elsewhere. Due to the number of Slayer creatures in this location, it can be a useful spot for filling ushabtis and filling the Slayer Codex.

If a player does not have a light source, after some seconds insects will attack, quickly reducing life points (1-10 x3 life points per second).

During The Mighty Fall[edit | edit source]

During The Mighty Fall, a number of high-ranking Bandosians occupy the caves trying to locate the Dorgeshuun.