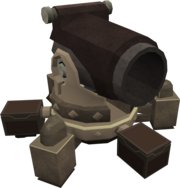 The cannon consists of four pieces: the base, the stand, the furnace, and the barrels. After a player has loaded cannonballs into the cannon, the cannon rotates and fires automatically at any attackable monsters nearby, causing damage to them.

Players may buy the full cannon as well as a mould to make cannonballs from the dwarf engineer Nulodion, south of Ice Mountain, for 750,000 coins. Alternatively, the individual parts may be purchased for 187,500 coins each. The "Talk" option on Nulodion must be used to obtain the full cannon, whereas the "Trade" option is used to buy the individual parts. If a cannon decays or the mould is dropped, Nulodion will provide a free replacement as well.

A player may own multiple cannons, but only one may be assembled per player at any one time, presumably to prevent players from filling areas with cannons.

On 9 November 2009 the model for the cannon’s Grand Exchange set when dropped on the floor was corrected.

After the 17 November 2009 update cannons no longer waste cannonballs on NPCs in the process of dying. There is also an auto-setup feature.

A player setting up a cannon

The dwarf multicannon is carried in four pieces in a player's inventory. To begin setting it up, the player must place the cannon base on a vacant square surrounded by eight more vacant squares. The rest of the cannon will automatically be set up from there. Finally, the player must use up to 30 cannonballs on the cannon by selecting "Fire." It is rather heavy when each of the four parts are in your inventory, and it will make your weight quite high (approximately 30 kg). If you do run with it, it is recommended to bring a familiar to compensate for the more rapid energy loss (such as a Spirit Terrorbird).

There are many locations where the cannon cannot be taken into or cannot be set up, including (but not limited to) the following list. If a player attempts to set down a cannon base in any of these areas, a message will appear in the player's chatbox saying that it cannot be done.

In other locations, the cannon may be set up but may be destroyed by an NPC almost instantly, or is almost useless due to limitations:

These are the mechanical aspects of the Cannon. This section includes the rotation, targets, and decay of the cannon's parts.

After the cannon has been set up, loaded, and fired, the barrel will rotate and fire at targets within its line-of-sight and range. The cannon barrel rotates in discrete intervals; there are 8 directions the barrel may face, and the barrel makes a 45 degree turn every 0.6 seconds (one game tick), completing a full revolution in 4.8 seconds. The cannon fires one cannonball while facing each direction, so it fires up to 8 cannonballs per revolution.

For each direction the cannon faces during its rotation, there is a specific set of squares relative to the cannon's location that a cannonball may be shot into at that time. This target region can be visualised by a triangle emanating from the cannon barrel. Squares may be cut off from the target region by an obstacle.

Additionally, even more cannonballs may be shot at monsters that take up multiple squares. Monsters taking up multiple squares can be shot at using any of the squares that they are covering. For example, up to 4 cannonballs can be shot per rotation at a dragon because they are so big (3 squares by 3 squares) and if done correctly strykewyrms (also 3 squares by 3 squares) can be hit on all 8 rotations. Also, the chances of killing a monster is much faster if the cannon is placed near the spawn point; for example, if a player sets up a cannon near a Frost Dragon spawn, the dragon will be hit 3 times in a row.

A cannon will never initiate combat against a revenant that the player themselves can not attack.

Although a cannon will never target another player, if a cannon is set up in the wilderness, it may target a player's familiar if that familiar belongs to a player who could be attacked by the cannon's user. This will result in the owner of the cannon receiving a skull. Players should exercise extreme caution about using a cannon in the wilderness.

The cannon has a max hit of 1152[1], accuracy and damage is affected by the player's Ranged level. 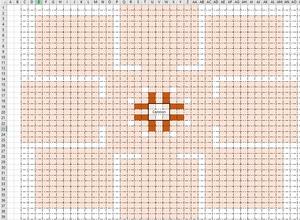 The cannons range is approximately 40x40 tiles. However, the cannon will not be able to hit every tile inside this area. See the image to the right for a depiction. 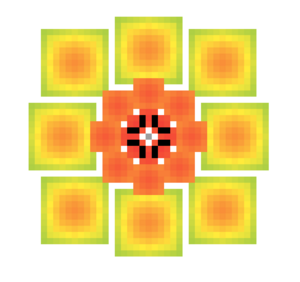 While the cannon will attempt to attack anything within its line of sight within certain tiles as described above, it prioritises certain spots. See the image to the right for a heat map depicting the cannons tile target priorities.

Cannons disappear after a certain period of time being continuously set up. 20 minutes after the cannon has been set up, a message appears that the cannon has jammed. It can be reactivated by repairing it. Picking it up is not required. It will disappear in 20 minutes if not repaired.

Cannons that do decay are not lost forever, but rather may be re-obtained for free from Nulodion (it does not matter if it was purchased at the Grand Exchange or from Nulodion himself). If bought at the GE, Nulodion will try to sell the player a new one if using the direct dialogue option. Instead, players should use the right-click "Replace-cannon" option. The fastest way to get to Nulodion is to cast Lassar Teleport (an Ancient Magicks teleport). Alternatively, players may teleport to the monastery using a charged Combat Bracelet and run to Nulodion, or they can choose to run from Edgeville or Falador. Another method would be to use the Wicked hood to teleport to the body altar situated below the monastery and run from there. Finally, a player can use a Skull sceptre to teleport to Barbarian Village and run north-west to Nulodion.

If the player logs out while their cannon is set up, it can be reclaimed free of charge by right-clicking Nulodion and selecting the "Replace-cannon" option.

A cannon will also disappear right away if the player switches worlds while it is set up. It can be retrieved from Nulodion in the same way as when it decays.

If a player dies while a cannon is set up, the cannon stays set up at the location. After it decays, it may be re-obtained for free from Nulodion. It is a common belief that cannons are lost upon death, but in this case the cannon may easily be re-obtained for free. This DOES NOT work in the Wilderness; any sort of death in the Wilderness while a cannon is set up, whether to monster or player, will result in the player not being able to obtain a free replacement.

If a player dies while a cannon, cannon parts, or cannonballs are in the inventory, these items are lost, unless the player is able to re-obtain them from the gravestone or reclaim them at Death's Office. The player can avoid losing their cannon if death is imminent by setting it up.

If the cannon itself is destroyed in combat, the player can re-obtain a new dwarf multicannon from Nulodion, free of charge. Certain monsters, such as the King Black Dragon and Kalphite Queen, can destroy the cannon.

Nulodion will not hand out a replacement cannon if the cannon or cannon parts are banked, set up, sold, or dropped. Replaced cannons come loaded with cannonballs equal to the amount loaded in the cannon when the cannon was lost.

The Oldak coil and kinetic cyclone are Magic and melee versions, respectively, of the cannon that can be created through the Invention skill. They use different firing mechanics but also consume cannonballs.

Cannons are commonly used by players training Slayer to speed up tasks, and are particularly potent in conjunction with Cinderbane gloves, as they quickly can apply mass poison. At about 400 coins per cannonball, the use of a cannon is often considered to be quite expensive. However, the cost is often considered to be justified by the bonuses of using a cannon. A player doing a slayer task can melee almost the entire time, getting nearly as much melee experience as they would without using a cannon. The cannon will also attack several targets even in a single-way combat area as long as the player is not under attack, (e.g. in a safe spot).

In crowded areas, such as the dagannoths under the Lighthouse, the cannon may produce a level of mayhem usually only achieved with Ancient Magicks spells. However, in highly populated areas, the player will need to remain almost constantly by the cannon in order to reload it because large numbers of cannonballs will be needed, also, they will probably get negative feedback from other people fighting.

Before the return of the wilderness many people brought cannons to areas of the Wilderness such as green dragons to speed up the kills and make large sums of money. Even though these are single combat areas if the Dragon is not attacking the player the cannon will attack any dragon that is not currently attacking any other player. Because it is a single combat zone it is advisable while using the cannon not to let the dragon attack you, so ranging can really benefit the player. This has generally had negative feedback with most players who kill green dragons for the bones and hides for money. Many players have complained about this on the forums saying that cannons break single combat zone rules. Now that player killing has returned to the wilderness this is more dangerous now as you can be killed by other players. If you do get attacked it is recommended to not pick up your cannon as it will be lost on death, but to keep it set up and then see Nulodion to re-obtain it for free after you have died.

On 8 March 2011, an update allowed decayed cannons (not player owned) to be repaired by taking them to Isak in the cannon repair shop, located in the Artisans' Workshop. Repairing a cannon required 62+ Smithing, a hammer, cog mould, pipe mould, test cannonball mould, and some Grade II steel ingots. For each fully repaired and tested cannon, 3,846 Smithing XP was earned. The process for repairing cannons was:

As the Artisans' Workshop was updated due to the release of the Mining and Smithing Rework, the basement (and the cannon repair shop) have since been removed. 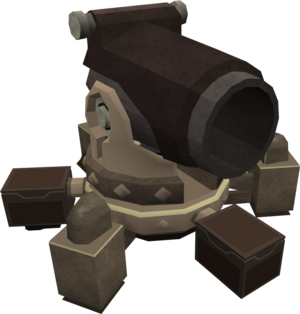 The old model of the dwarf multicannon