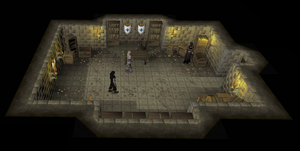 Part of the Temple Knights' HQ, during Quiet Before the Swarm.

The Temple Knight HQ is the main headquarters of the Temple Knights, a group of Saradomin servants dedicated to defeating any threat to Saradomin. It is only featured in Quiet Before the Swarm, Recruitment Drive and Ritual of the Mahjarrat.

Its exact location is unknown, though it is assumed to be somewhere below Falador, as hinted by Sir Tiffy Cashien on several instances. It is a highly guarded stronghold, and even the player, who is a member of the Temple Knights, is not allowed to access the area with their equipment. It is also the location where Savant communicates through the commorb.

Its exact size is unknown, though it is known to span numerous chambers, as the player visits these during Quiet Before the Swarm and Recruitment Drive. It strongly resembles the interior of the White Knights' Castle, further hinting that it lies below Falador. It is also unknown how many people are aware of its location, aside from Cashien and Lady Table. Commander Korasi once visited the HQ when she was injured. Sir Tiffy mentions that access to the base is on a strict Need-to-Know basis.