The official world for Lava Flow Mine is world 71 (P2P).

The Lava Flow Mine is one of the most important locations of Keldagrim, being the main source of the dwarven city's power supply. It is run collectively by the Consortium and overseen by Foreman Jaak. The mine was first released along with the quest King of the Dwarves on 4 January 2011. Later, a training area associated with the mine was released on 16 May 2011. It is a place for players to train Mining quickly without gaining ores (though gems may be acquired) and by pleasing the Liquid Gold Nymph, players may attain pieces of the golden mining suit. A Mining level of 65, a Smithing level of 70, and a Strength level of 77 are required to complete the quest and are therefore required to use the mine.

The Lava Flow Mine acts as a geothermal power plant, using Gielinor's thermal energy (the lava) to turn water into steam, which in turn operates the various mechanisms around Keldagrim. 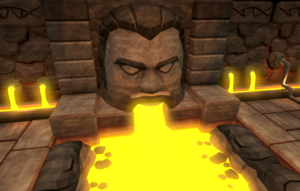 A statue in the Lava Flow Mine.

Located in Keldagrim, the Lava Flow Mine is used as the primary power source for the city. It creates steam, on which many of the city's machines work (similar to the Blast Furnace). It is a vital part of Keldagrim - the Green Gemstone Director calls it the single most important piece of machinery in Keldagrim.

At the start of King of the Dwarves, a cloaked figure blows himself up in the mine, causing a cave-in, which wounds six of the miners. He blows up the secondary boilers only, and black guard troops come to fix them very soon. They leave the miners under the rubble, for the player to mine them out. Though at first it seemed that the guards were not concerned about the trapped miners, it is revealed that if the boilers weren't fixed, they might have exploded, causing further deaths and leaving most of Keldagrim without power for days. After the quest it seems 3 of the 6 miners have died: 2 died immediately, and 1 more died of his wounds later on.

During the quest the Blue Opal Director reveals how the lava flow mine works. The lava comes from the sub-Barendir magma vent. It is siphoned off from this vent and run along channels in the mine. The lava heats water in primary boilers over the channels, and the steam created is channelled into seven secondary boilers in the centre of the mine. From here, the steam is pushed through distribution vents to the various machines around Keldagrim, such as the mine carts and the blast furnace.

The Lava Flow Mine is located through an opening on the east wall of Keldagrim. The easiest way to get there is by using the mine cart from the Grand Exchange to travel to East Keldagrim, and then run northeast.

Alternatively, players who have level 99 in at least one skill or are able to wear the quest point cape can tune the Prifddinas Max Guild skilling portal to the Lava Flow Mine. The portal will teleport the player inside the Lava Flow Mine.

Optional: Ghostspeak amulet, cramulet, or completion of the hard Morytania achievements to speak to the Dwarven ancestor spirit. This is required to understand him and hear his story. These items are not needed to get the reward +10% experience for 10 minutes. 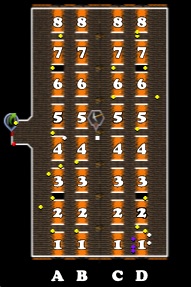 The main purpose of the Lava Flow Mine is to mine off crust from one of the four lava channels. Foreman Jaak will say which of the four lava channels needs the most attention, which will also yield the most mining experience per successful cut of the crust. You can check the steam gauges next to each channel segment to see the flow in that segment - the segment with 50% flow gives the most experience.

After a while (anywhere between 4 to 7 minutes), the flow rates change; you will receive a message in your chatbox when this happens. Jaak will know which one yields the most experience again. Unless the world is fairly full, it is advised to talk to Jaak instead of finding the correct flow yourself, because finding it with too few people might take too long. The segments next to the one with 50% flow will have 60% flow, and the next segments 70% flow and so on. This can help in finding the best segment to mine.

When mining the best channel segment, one successful cut yields 100 experience when the exact correct part of the correct flow is mined. Experience gained is proportional to the flow in that segment, as shown in the table below.

Strange rocks can be obtained from mining the crusts.

When the blockage segment moves, immediately go to Foreman Jaak near the entrance to find the new channel. Once you know this information, go to the steam gauge for either segment 4 or 5 of the new channel and find the percentage. If it isn't 90% (which only one end can be from the centre segments) or 50%, then check the other segment's value and use that as an offset to find the location.

As an alternative to asking Jaak, the correct channel can be found by reading the flow at two central locations in segments 4 or 5: between channels A and B, and between channels C and D. At each location read the two dials, and stop as soon as you find the one with less than 100%. Then read the neighbouring dial to find the direction of the correct segment.

To maximise experience rates while in the Lava Flow Mine, you must be mining the segment with 50% flow. This can be quickly identified by firstly looking in segments 4 or 5 of each channel to find the one with below 100% flow, or talking to Foreman Jaak to be told which channel letter is slower, and then moving along it until you find the 50% flow, once here, you should begin mining.

Also, it is recommended to mine in any of the unofficial worlds with a clan to find the 50% segments faster.

At level 80, the maximum experience per hour with only a lava titan, no other boosting equipment/items, and a pickaxe:

There are multiple distractions that can occur while mining the crusts. 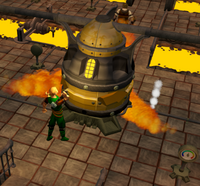 Players fixing a broken boiler in the Lava Flow Mine.
This text will disappear if the form is loaded properly.

In addition to the Mining and Smithing experience obtained by contributing to the mine, the Liquid Gold Nymph will appear when the progress bar is filled and reward players with a piece of the golden mining suit in the following order. Wearing all five pieces gives a 6% boost to experience while Mining (1% set bonus), similar to the effects of the lumberjack clothing set. It is no longer possible for a player to obtain multiple suit pieces. Previous to a recent update, one could drop a piece that they wish to obtain and then talk to the nymph for another then proceed to pick up the piece they dropped after they receive the piece they want from the nymph (The option to drop was replaced with destroy).

*If the player owns any Varrock armour, the mining top will also give the chance of receiving extra ores (up to whatever ore your Varrock armour would normally allow).

The Liquid Gold Nymph will also offer to trim the pickaxe in the players inventory or tool belt, if they have acquired the complete golden mining suit. Foreman Jaak can remove the gilding on any of the pickaxes.

The player also has the option to get a 2500 experience reward instead of a gilded pickaxe, by asking if the Liquid golden nymph has nothing other than gold.