The Poison Waste Slayer Dungeon, also known as Poison Waste Dungeon and Poison Waste Sewers, makes up the immense sewerage of the legendary and malevolent gnome city Arposandra. The experiments of Glouphrie the Untrusted, which involved the warping of tortoises and terrorbirds to intelligent creatures, has led to large amounts of toxic waste. This waste is disposed of through the sewers and pumped into Tirannwn. The degree of this is so bad that it defiled, the area south of Isafdar, and is now known as the Poison Waste. At the end of the sewers is a door to the basement of Arposandra, which is connected to the Galarpos Mountains through an air vent, although it is guarded by two guards. These have access to an emergency button, which, when pressed, releases tar and toxic gas to kill off any intruders. 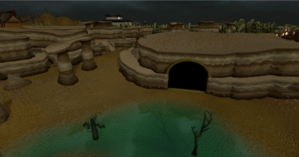 The dungeon is in a canyon west of Castle Wars. It is technically in Tirannwn, but you cannot reach it by passing through the main parts of Tirannwn, Arandar and Isafdar. Instead, you can travel here by using spirit trees (fastest), using the Grace of the Elves incandescent wisp colony teleport (must be set in Max guild garden, or when first worn), by using fairy ring BKP (partial completion of the A Fairy Tale II - Cure a Queen quest is required), or by walking from Castle Wars and using a crossbow and mithril grapple to cross the river. A quick way of banking is using a tier 2 or better luck ring (ring of Wealth, ring of Fortune, luck of the Dwarves, or Hazelmere's signet ring) to teleport to the Grand Exchange in Varrock then using the spirit tree in the north east corner of the Exchange. Additionally, players who have completed the Tirannwn Set Tasks - Medium can use the Tirannwn quiver 2 teleport to arrive within the first room of the dungeon).

The entrance to the dungeon is west of the spirit tree, along the edge of the poison waste. 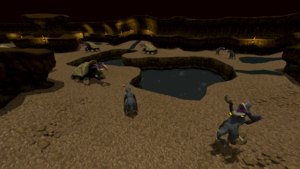 Another part of the large sewers.

While in this dungeon players are unable to teleport out, except in the chamber just outside the battle room where the three level 82 warped terrorbirds were fought during the quest.

The level 72 warped tortoises in this dungeon are not aggressive. However, the level 82 warped terrorbirds are. Be prepared for multiple terrorbirds attacking you at the same time.

All monsters in the dungeon are polluted from the poison waste in the dungeon. This makes them invulnerable to damage. Using a crystal chime on a monster cleanses it, temporarily rendering it vulnerable to damage. If the cleansing wears off during a fight, just use the chime again. Note that using a chime on a tortoise does not cause it to attack you; it fights only if you attack it with melee, ranged, or magic.

According to Slayer Masters, the terrorbirds' ranged attack is based on sound, and wearing earmuffs, masked earmuffs, or a slayer helmet weakens the strength of these ranged attacks.

Most players rarely venture deep in the dungeon except during The Path of Glouphrie quest. After the quest, players usually come here just to slay the tortoises and terrorbirds, which can be found fairly near the entrance. This situation allows for fast banking: Players do not need to go deep into the dungeon, and the nearby spirit tree means the Grand Exchange and its bankers are readily accessible. A few players wishing to slay terrorbirds do go to the length of the dungeon, as there is a room there with only one terrorbird in it. This allows the player to melee the terrorbird without other terrorbirds making ranged attacks.

In the rooms with the large number of black tar, there are puddles of black tar that occasionally emit a small gush. Players cannot run past them and if they are running they will immediately slow down to walking speed. This only affects the second and last largest rooms.

The dungeon seems to be beneath the hidden city of Arposandra, as the terrorbird guards refer to what is going on 'upstairs' at the end of The Path of Glouphrie quest. The room containing these guards currently cannot be entered. 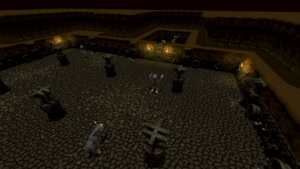